The Bodleian Library and ZZ Top 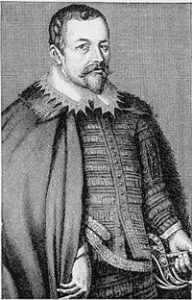 THE BODLEIAN LIBRARY was refurnished by 1613, and the Old Schools Quadrangle extension was already under serious planning – to be measured in cubits rather than feet and inches, and based on a temple as described in the Song of Solomon. The timing is a shame in a way because Sir Thomas Bodley, the man behind the build, died in January of that year. So if we see the building as his toy steam train, sadly he never got to play with it on the track. Bodley was a boring man – obsessed by the poor quality of the carpenters he employed and, hypochondriac and stentorian until his end, the author of a grandiose memoir, probably dictated; leastways you would not wish to have sat next to him at a garden fete. He was pious too, and whenever there was a hint of Catholicism in this country he disappeared to Holland to get holy again. But for all of that he was a caddish if refined gentleman, for he didn’t follow the traditional route and marry for beauty as the rest of us weak-willed chaps do, he married for wealth: his wife inherited a huge fishing empire and afforded him much pocket money, and Bodley could swan through life doing as he pleased, although he had pocket money enough of his own already. His bookish nature and his interest in the rebuild of the library at Merton College, Bodley’s own college, spurred him on to volunteer to resurrect the first official University library, the Duke Humfrey’s Library, added as the first floor above the Divinity School. (The original University library had been built in the 1320s above Convocation House next to the University Church, St Mary the Virgin in the High.) By the late 1500s the library had declined somewhat, and when Bodley set to in 1598 it was in a parlous state, no furniture even and few books. Bodley donated some of his own collection and started to hunt for stock internationally; the Library was finished and opened in November 1602. The quad was completed in 1620: lecture halls on the ground floor, art galleries on the second floor, the books and manuscripts on the first floor. 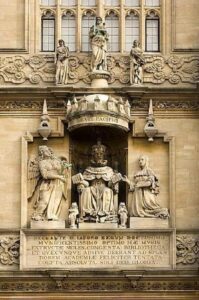 Bodley was a skilled manipulator. The first thing to do was to attach the King’s name to the project, and James I of England (James VI of Scotland) sits high in the Tower of the Five Orders, clutching a brace of books (though they look suspiciously like toilet roll from the ground, the King is in constipated pose). The books were the King’s own published writing, dull as ditchwater but much vaunted by the obsequious Bodley to get James’ attention. To wrestle money from donors was much easier once the King was involved (Cambridge missed this trick and still has no rival library to boast). More than that, Bodley was a great broker of deals (Bob Geldof his most likely modern incarnation). Portraits have Bodley with a short back and sides and I never heard him sing (Geldof either for that matter), but he was similarly ferocious: Geldof the only man in history to have gotten both Pepsi Cola and Coca-Cola to have sponsored the same event (Live Aid in 1985), and Bodley it was who in 1610 stitched up the deal of the millennium when he cajoled the Stationers’ Company in London, at the time sort of the King’s censorship unit. The deal was to hand on to the Bodleian a free copy of every manuscript submitted for publication. This is the beginning, of course, of copyright law and the creation of copyright libraries, but also the beginning of a huge collection of books within the Bodleian.

It is said that they never git rid of any book, and over twelve million sit in the Bodleian today, in its two cavernous floors underneath, the recently renovated Weston Library (its ziggurat design originally by George Gilbert Scott finished in 1940, with over half of its books housed underground and transported until recently via a Lamson tube system) and a warren of storage and 153 miles of shelving twenty miles outside Oxford, near Swindon. The collection is counting still – seven to eight thousand arrive each morning – and the Bodleian still does not pay a penny for any of them. 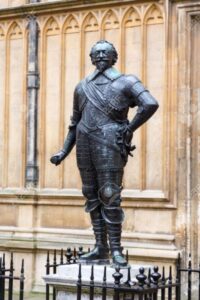 When Bodley died, the Earl of Pembroke, another book lover, Chancellor of the University and founder of Pembroke College (an Oxford college the size of a bike shed that sits opposite Christ Church, in fact for years I thought it was a bike shed), took over the project. A statue of him in the style of Rubens stands in the Old Schools Quadrangle, fat and portly for he was in his fifties when modelled (it happens to us all), but if you were to look him up on the internet as a younger man you would discover good looks and vivaciousness. A rakish life backed up these good looks and he did time eventually but still he denied paternity upon release (his cousin argued otherwise).

Pembroke was so colourful that he boasted William Shakespeare as a close friend. In fact the First Folio of plays is dedicated to Pembroke and his brother. This is in contrast to Bodley, a boring man, who forbad even the manuscripts of Shakespeare entering the library, for Shakespeare was theatrical and deemed therefore ungodly. But more than that: the Sonnets, the heartfelt Mills and Boon of their day, were dedicated to “Mr W. H.” Nobody knows for sure who W. H. is (we know so little about Shakespeare), but the frontrunner in academia today is that it was a man called William Herbert. The Herbert crest is on display in the Bod Quad, and the Earl of Pembroke is indeed William Herbert. Some wags would even portray Pembroke as Shakespeare’s illicit lover. Rubens’ statue, an expensive bit of kit, is well guarded these days. His head is now pinned down, yet it used to roam free, and once upon a time it was a jolly jape each morning for students to steal into the Bodleian and spin it round. Another tradition bites the dust.

The Library maintains its momentum in today’s technological world. Even the death watch beetle that had gnawed the ancient oak of the Duke Humfrey’s Library for centuries were quelled ten years ago: spiders were unleashed in the roof space to cull them environmentally. Similarly the written world shall live side by side, and even overcome, the digital onslaught of the modern world.

Bodley, King James and Pembroke stood side by side (and with guitars) might have looked an awful lot like ZZ Top. 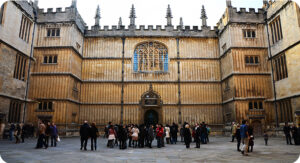 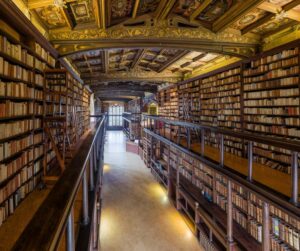