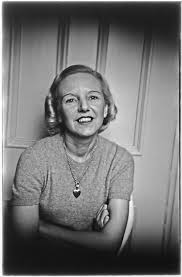 ANNA KAVAN was born Helen Emily Woods in 1901 in Cannes, France, and was raised and educated in Europe and California. Her wealthy English parents were cold and displayed scant affection. Her father committed suicide when she was thirteen; she loathed her mother but was dependent upon her for financial support.

Marriage at seventeen to a man twelve years older was to be an unhappy experience but produced a son (who was killed in the war). Her second marriage to a drunken would-be painter in 1931 was a disaster, albeit brief. At various times she lived in France, Switzerland, New York, New Zealand and Australia before finally settling in London.

A gifted woman, she also painted bizarre studies of demented women and was a talented interior decorator, for which she gained attention. In 1950 she formed the architectural and design firm Kavan Properties, and through the 1960s renovated old houses in London and designed and constructed her own final home. She lfd an otherwise remarkable life that could have threatened to overwhelm her writing.

For forty years she was addicted to heroin, it has been suggested (by her friend, the writer Rhys Davies, in his introduction to Julia and the Bazooka) because of a painful spinal disease, although she made half-hearted attempts to detox. She also used amphetamines on a daily basis when writing, suffered bouts of depression, nervous breakdowns and periods of mental illness (she spent two long periods in mental hospitals in Switzerland and England), and made at least three suicide attempts. All in all, her life should not be considered a contented one.

When found dead at home in 1968 with a syringe beside her, it was reported that her flat contained enough heroin to kill the whole street.

Ice is a haunting and surreal novel, the narrator and a man known as ‘the warden’ search for an elusive girl in a frozen, seemingly post-nuclear, apocalyptic landscape. The country has been invaded and is being governed by a secret organisation. There is destruction everywhere; great walls of ice overrun the world. Acclaimed by Brian Aldiss on its publication in 1967 as the best science fiction book of the year.

The Parson was not published in Anna Kavan’s lifetime, but found after her death in manuscript form and was probably written between the mid-1950s and early 1960s. The parson of the title is not a cleric, but an upright young army officer, albeit prudish. On leave in his native homeland, he meets a rich and beguiling beauty, the woman of his dreams, Rejane, who persuades him to take her to a sinister castle situated on a treacherous headland…

Sleep Has His House An autobiographical account of an unhappy childhood, Sleep Has His House startled with its strangeness in 1948 but is now acclaimed. Anna Kavan maintained that the plot of a book is only the point of departure, beyond which she tries to reveal that side of life which is never seen by the waking eye, but which dreams and drugs can suddenly illuminate.

Asylum Piece This collection of stories, mostly interlinked and autobiographical, charts the descent of the narrator from the onset of neurosis to final incarceration at a Swiss clinic. The sense of paranoia, of persecution by a foe or force that is never given a name evokes The Trial by Kafka, the writer with whom Kavan is most often compared.

Who Are You? is a sparse depiction of the hopeless, emotional polarity of a young couple and their doomed marriage spent in a remote, tropical hell. The novel’s typical autobiographical bias can be traced to Kavan’s life in Burma during her first marriage. It is experimental and clearly anticipates the nouvelle vague cinema of Jean-Luc Godard.