The Discordant Who? Atzmon & Debate 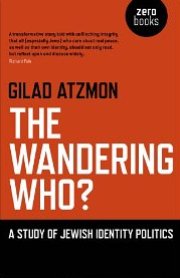 A FEW YEARS AGO Gilad Atzmon’s book The Wandering Who? was taken off the virtual shelves of the Guardian book website.

My first reaction was to be amused that the Guradian ever had a book website, for it’s a bit like Halfords selling doughnuts or a local corner shop trying to sell insurance. My second reaction was to congratulate the author. To be castigated by the Guradian, possibly one of the worst newspapers in the western world, is an accolade and is bound to sell books and highlight his pitch. Just because the Guiaradn espouses liberalism, social welfare, justice, world peace, feng shui and climate change doesn’t prevent it from being a bottleneck for all these issues, and to my eyes the paper tilts at windmills and sidetracks the main issues of any story, as ‘good’ liberals tend to do. In other words it has long hair but it isn’t really much of a hippy. Of course it now adds to its CV that it has silenced a voice of dissent, the sort of act one has come to associate with dictatorship and oppression.

Atzmon is a proud self-hating Jew. He has tried sincerely to come to terms with his road to Damascus discovery: when a young man serving in the Israeli militia in Lebanon he witnessed Palestinian prisoners of war kept in cages like dogs, and he wondered why his nation, born out of concentration camp suffering, could inflict such pain; his external world crumbled when he interpreted Israel to be a tragic Palestinian palimpsest. His prodigious talent as a jazz saxophonist afforded him a passport and he settled in England twenty years ago, never to return to Israel.

His book is self-conscious and single-minded in its quarry: it is about Jewish identity politics (as its subtitle declares) and a central theme is to compare it to other forms of marginal identity politics. It does not even broach biological determinism. In fact Atzmon has no beef with, and even has much respect for, those who are of the Jewish faith or those who see themselves as of Jewish origin. There may be many problems with the book. One may say that it oversimplifies, it may seek to transport its reader on a magic carpet of conspiracy theory and intrigue and offer no hinterland of proof, it may have only a cartoon grasp of world economics, banking, politics or realpolitik, it may in fact be wrong. But only rarely does a critic engage the book upon its premise, that Jewish identity for some straddles the Zionist/anti-Zionist divide and claims Chaim Weizmann’s dictum that “there are no English, French, German or American Jews, but only Jews living in England, France, Germany or America.” It seems a relevant issue to address as we have been told recently that, disturbingly, 58% of Jews consider that they have no future in Britain (and that 95% of hate crimes in the UK are anti-Semitic in nature!). I just don’t believe these figures, maybe I am naïve, but if they are to be believed then Atzmon’s book might become an uncomfortable read. Neither is the book without relevance in international affairs as the bombs fell as confetti upon Gaza last year.

Oddly the Guranida is licking its dog’s bollocks rather late in the day, for The Wandering Who? was published over three years ago and to much furore then: a shambolic revolt by some of Atzmon’s Zero Books stablemate authors, a melee of carping reviews and general butt kicking with legal threats unleashed upon the publisher. Alan Dershowitz had a public spat but drew attention only to Atzmon’s possibly diametric philandering – that he loves Palestine before Israel, loves original thought before plagiarism, and allegedly loves his saxophone before Jeffrey Epstein.

So all in all I find it rather extraordinary that the book has been removed from the Gi*uckrd office, custodian of liberal thought, and incidentally not so long after Atzmon was prevented from performing in Bonington by Gedling Borough Council, a sort of kangaroo council decision following allegations by some locals, who included Ross Bradshaw, founder of Five Leaves Publishing and, incredibly, one of the most brilliant of booksellers there is. 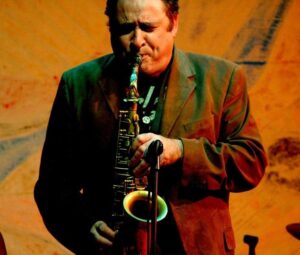 Gilad Atzmon is a perplexing figure. He is an international jazz saxophonist, many would argue one of the very finest in the world today, a stature confirmed by his appearance as guest artist on the latest Pink Floyd album. Yet at the same time he has led a parallel life as author, public speaker and television pundit of renown in a very dangerous discourse. To run two high profile careers has been courageous, and that he has dodged the endless flak that has come his way, including death threat, is a miracle. It may be that his jazz artistry has anointed him with some sort of protection; some argue also that it has allowed him to exploit his position and soft sell what is seen to be his anti-Semitism, though I believe he is straightforward both in what he says and how he says it. The intriguing question is where does his personality end and his argument begin? – a question one can ask of all muckrakers, seekers of the truth, iconoclasts; he certainly takes no prisoners. He may have idiosyncratic thought or strike an argumentative discord, yet he has never dissembled, backtracked or yielded for the sake of a more comfortable life; indeed he has seemed to rejoice in the fevered spotlight and has seen criticism often to be a validation of his argument. Although I understand that what he says is problematic, I am content not to view him as anti-Semitic and equally am content not to agree with all that he says.

Gilad Atzmon and the Orient House Ensemble in performance