TO READ A SENTENCE of David Foster Wallace is to discover a man on the precipice, for his writing ganders chaotically like a studded skein of geese with a literary lilt and a cadence of a style that incorporated jargon and a promiscuous vocabulary, that featured abbreviation and acronym, lengthy multi-clause sentences littered with parenthesis, and an original use of footnote and endnote and often these were as expansive as the text to which they referred, albeit Wallace claimed that they were to disrupt the linear flow of narrative and to denote his perception of reality[1], although he admitted that to jumble up sentences would have done that[2], but would then render the text illegible, and so on. 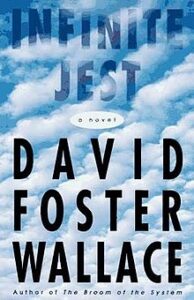 Infinite Jest, first published in 1996 (so long ago now!), is a long farrago of philosophical quest and comedy. “At no time while reading Infinite Jest are you are unaware that this is a work of complete obsession,” writes Dave Eggers, “of a stretching of the mind of a young writer to the point of, we assume, near madness.” Writing was indeed a maddening activity for Wallace. He looked for stylistic creativity and difference (he saw how he stood apart from mainstream literary America), yet that difference ultimately became a restraint as his personal well-being and creativity became entwined alarmingly. He had stumbled across creative writing almost by mistake. Reading Pynchon and Don DeLillo had turned his head; he came to discover that fiction could not only convey information (and lots of it, he loved Tom Clancy’s novels because they were stuffed full of facts) but also rival philosophy for making sense of the world. Novels for Wallace were, like life, full of “stuff,” invasive and threatening, yet joyful and fulfilling too. Earlier in his life he had withdrawn from writing because of the toll it took on his psyche. He had suffered from severe depression since college days, and an attempt to rid himself of its medication, which he felt stunted his writing, it is thought may have contributed to his suicide, aged 46, in September 2008.

Infinite Jest blends literary deceit and rule breaking as though guerrilla warfare, is a quizzing of the literary hierarchy and of the two-up two-down, bog standard novel, it throws out the baby and the bath water yet never throws a spanner in the mechanics of its grandstanding style. It is humourous wordplay and compulsive filigree writ large. Its setting is a tennis academy and an addict’s halfway house – these morph in Wallace’s personal biography: he popped pills and was quite a decent tennis player (Wallace’s own candescent writing on tennis were collected together and published last year, here is a wonderful essay, Roger Federer as Religious Experience) – and explores what the foibles and pleasures that we choose for ourselves choose to say about who we are. It was set in Boston where he had lived in the late 1980s and where, he wrote to a friend, he would “have laughs, listen to rap and James Brown.” It is, wrote James Wood, the “pursuit of vitality at all costs.” One of the most challenging books – it is both weighty and forbidding – Dave Eggers refers to it as a ‘duty’ read. Dunno about that, but Wallace, to my mind, is the writer who sums up best the late twentieth century age, its burgeoning information overload, its false sense of choice and entitlement, its lack of freedom and spontaneity. How odd then that he was tethered to the book in its physical form (also, most interestingly, he mixed writing longhand with both typewriting and digital format).

It could be the book most bought yet the most unread ever, good for a hundred pages, you get its gist and gristle by then, no need for the rest. Although come to think of it Proust betters that, as people buy it still but surely nobody gets past the first ten pages, I imagine, À la Recherche… isn’t even the sort of book to be seen reading. You would wish to be seen reading Wallace, for it has a hinterland of style, offers to writing what Habitat once offered the living room: chic. Also the end of dull, latticed lampshades with drop down doilies (which sums up Proust, most novelists today hang still their lampshades in similar vein).

[1] and the “best way to get the exfoliating curve-line plot I wanted”. Wallace had suggested endnotes – they “allow …me to make the primary-text an easier read while at once 1) allowing a discursive, authorial intrusive style w/o Finneganizing the story, 2) mimic the information-flood and data-triage I expect’d be an even bigger part of US life 15 years hence, 3) have a lot more technical/medical verisimilitude 4) allow/make the reader go literally physically ‘back and forth’ in a way that perhaps cutely mimics some of the story’s thematic concerns …5) feel emotionally like I’m satisfying your request for compression of text without sacrificing enormous amounts of stuff” – his editor settled on footnotes, though hundreds of pages were cut from the various drafts of Infinite Jest even so
[2] to sentences admitted up although done would that he have jumble that