Here is the finest of Paul McCartney’s songs, the highlight of the album released to announce formally the break-up of the Beatles, the eponymous McCartney, the song of course being Maybe I’m Amazed; not surprisingly it is the song of which McCartney has said he is most proud. He wrote it as he emerged from alcohol infused depression that engulfed him after the Beatles had broken up in early 1969, a news story to be hidden and announced only after the release of their last two albums, Abbey Road and Let It Be. McCartney had started eventually to write and record again, if randomly, in his Scottish hideaway. But this track was recorded at Abbey Road studios on one day in February 1970, the half-session booked using an alias for secrecy. McCartney overdubbed all the instruments on an 8-track, his wife, Linda, added harmonies.

Even when with the Beatles, when Lennon was there to act as antidote to his tendency to parody rather than write from the heart, McCartney was prone to the whimsical, the kitsch and nostalgic. As his solo career progressed he was prone more to the unfinished (the McCartney album included many such) and certainly the pointless – Silly Love Songs a highlight, but only one of the many nadirs of his later career. But consistent throughout his musical journey is his matchless and innate ability, when he wished to use it, to bind music to words, a gift not so commonplace amongst his contemporaries and the reason why he can trace his lineage back to Schubert, if grandiosely. The introduction to Maybe I’m Amazed closes on a flourish, an A chord, and the verse starts with a piece of magic: a surprise modulation to Bb for the first line of the song, and of course the perfect and most amazing setting for the opening lyrics [‘Maybe I’m amazed…’]. The modulations for the song are bold, seemingly suggesting a sense of non-related discomfort, yet logically very tidy, sometimes with arresting and false harmony in the bass. Then seemingly finding a musical resting point, an anchor in C, it modulates again up a full tone, and a bombastic, ritualistic, one chord riot follows, McCartney spitting and screaming the words. 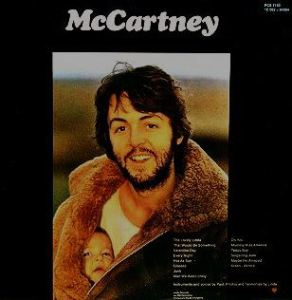  A common fault on YouTube is that people try to make sense of lyrics and tidy them up. The whole point of this song is that we are never sure if it is a cry for help or a bask in his finding emotional harbour, if it is fretful and fearful or joyful and affirmative: the words will slip to incoherence, their meaning ricocheting off conflicting emotions. And as such the song is the perfect couplet to McCartney’s throwaway song for the previous Let It Be studio filming, recorded on the studio rooftop, I’ve Got A Feeling. This was a final true Lennon and McCartney collaboration with John Lennon’s chorus added to McCartney’s verse. This is a song full of life affirmation (optimism is rampant in the opening guitar chords) yet supremely ambivalent: “yeh” and “no” sit side by side in the lyrics with no hint of nonsense. This is a songwriter unsure of his changing world, which at once spins out of control and offers shelter, and McCartney’s unsure and nervous reaction to it is writ large. And in this sense the collocated lyrics make perfect sense, enriched by the tussled music.

McCartney’s singing on Maybe I’m Amazed is carefree and outrageous, with layered depths of sonority and emotional timbre, depths that I think surprised him. It is the singing of a man who has learnt to control his voice – this through lengthy theatre sessions in Hamburg, touring in threadbare vans, tramping round the world in the first years of fame, long nights in the studio – yet lose control of it also. This is reminiscent of the Lennon and McCartney early vocal lines, especially Lennon, whose rendition of Twist and Shout could only be performed at an evening’s end as it rasped his voice beyond comfort. On his next studio album, Ram, McCartney was to exaggerate these tonal qualities, and its biting effect was perhaps lost with casual use. But the frenzy and commitment of his singing on Maybe I’m Amazed remained unsurpassed in his career, eeither before or after. (Lennon was discovering simultaneously new emotional and musical resonance in songs like Mother.) What immediately follows this song for McCartney was the polaric, less schizophrenic (yet rarely mentioned) single, Another Day, third person storytelling of undefined suburban loneliness and, if much more tame and controlled, another flash of McCartney brilliance.

Luxuriously, Maybe I’m Amazed was never released as a single. McCartney at this urgent time in his life had no time and no interest in the merry-go-round that would accompany all of that. A promotional sequence of photographs was cobbled together to make a promotional video, by McCartney’s friend, David Puttnam. The song received buckets of airplay and was recorded almost immediately by many disparate artists, famously the Faces (thank goodness Rod Stewart takes over from a visibly drunk Ronnie Lane on this video clip), also Petula Clark and the ineffably sexual and 60s’ throwback Sandie Shaw (listen to the echo, the early Beatle beat rhythms and clichéd mid-Beatle orchestrations on the recording!); later Joe Cocker introduced the musical aesthetic of Liberace to this heart-stop of popular music.

Maybe I’m Amazed is the only song from this first part of his solo career that has remained consistently in McCartney’s repertoire.

Baby, I’m amazed at the way you love me all the time,
And maybe I’m afraid of the way I love you.

Baby, I’m a man, maybe I’m a lonely man
Who’s in the middle of something
That he doesn’t really understand.

Baby, I’m a man, maybe I’m a lonely man
Who’s in the middle of something
That he doesn’t really understand.

Maybe I’m amazed at the way you’re with me all the time,
Maybe I’m afraid of the way I leave you.

This entry was posted on 25th December 2020 by Dennis Harrison in Uncategorized.