An Homily to Keith Jarrett 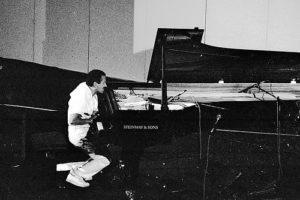 WHAT KEITH JARRETT plays on any concert evening is spellbinding. It needs to be, to stand above his histrionic and hissy fit, hypochondria, grunts, Gurdjieff philosophy and Garbarek past (very difficult to forgive him those tedious classical Eurotrash early 1970s’ recordings he made with Jan Garbarek, which might be the equivalent of painting the altar at the Sistine Chapel like a McDonalds drive-thru kiosk – “in Europe,” said Miles Davis, “they like everything you do, the mistakes and everything, that’s a little bit too much”).

When Ornette Coleman said to Jarrett that “man, you’ve got to be black” (because of his appearance), Jarrett replied that he was working on it. As proof, he had turned down the offer of piano lessons from Nadia Boulanger when younger so that he could concentrate on jazz, and to get to play eventually with Miles Davis. Miles said that “white musicians seem to lag behind the beat,” suggestive perhaps of comfort and satisfaction. Probably so, if Miles said it. But Miles said also that Jarrett was a genius.

Kern and Hammerstein’s Ol’ Man River – Paul Robeson’s film version its best known performance (he changed its lyrics for his recital performances) – contrasts the vicissitudes of the song’s African American one-man Greek chorus character, Joe, with the relentless Mississippi River. In this performance here from 2002, Jarrett’s own inbuilt metronome keeps his playing steady to the beat, and stops his jazz horse from bolting. Jarrett chimes as a mantelpiece clock, and is Ol’ Man River and Old Father Time too (who cheekily adds a beat at 2:00). The song’s pentatonic (five note) melody is redolent of the minstrel shows, Stephen Foster and what Miles would have disparaged as Uncle Tom music, is here given a tender and delicate wash. Jarrett’s sensitivity turns it into a lullaby free of any tension, anchored by gentle rhythmic gusto, bristling with Bach like figures at one point near the end but seamless whispers of counterpoint all through. He ends suggestively on the flattened seventh note, the devil in Jarrett.

Generally I find Jarrett’s trio playing problematic if hugely stimulating: often it seems to be reserved, his classical sensibilities inhibit an all out raw swing, his playing often not as gutsy as it might be; plenty will disagree. But his solo piano playing is Jarrett at his best and purest, and, boy, when he gets it right… My heart still melts when I listen to Jarrett’s most famous album, The Köln Concert 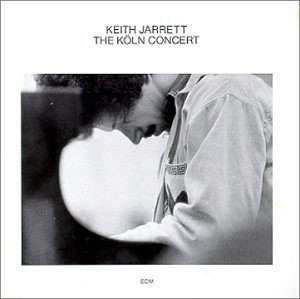 , recorded in January 1975.  Jazz inhabits such a big, all-embracing world, none bigger than with the Köln concert (indeed it is the biggest selling solo piano recording in any genre ever) where he uses classical style filigree and very few jazz licks. So many jazz diehards think this is only a Mike Oldfield-type sound, a second chord found on the inadequate piano he had to play that evening. In fact Jarrett used mainly the piano’s middle register by design, for the piano provided was of such poor quality; it was badly recoded also. Further, having travelled badly and with food poisoning, Jarrett wasn’t well. A full house (the concert started at 11:30pm, to follow a previous concert in the hall) meant that to cancel was difficult, and he may have felt obliged to not let down the 17-year-old who had organised the evening. Yet that evening he wove mantra-like harmony, struck dynamic rhythms that demanded Jarrett’s foot stomping, teased his facial contortions, his shouts of abandon and body twists as his deft fingerwork chased the contour of his marbled musical statue. His silk touch is lost occasionally in the steam engine of his imagination. Lone voices then emerge from the depths, rise to climax, and collapse like Debussy’s sunken cathedral, subsided with exhaustion; moments of reflection then allow his fire to be lit again, then to alternate serene moments as bells chime across the hills and excited movement as birds flutter; felt, cotton, rubber, all textures are caressed, glass smashed, each shard stabbing deep into your musical soul. Stella Gibbons’ prose is alive and well today, but Jarrett’s music that evening, as still now, was just fab. And some.

This entry was posted on 25th December 2020 by Dennis Harrison in Uncategorized.