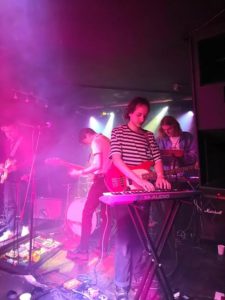 BIRTHDAY CARD, the ‘melancholy pop’ band from Aylesbury, launched their first single, Shy Away, with new label NHAC just before Christmas. The gig was at the label’s home, the iconic Notting Hill Arts Club where many current stars have started their careers. The label is owned by Shabs Jobanputra and Ewan Grant of Relentless Records, a totem of the pop industry; these are guys who know a thing or two about the current music scene then.

Birthday Card’s set started with the bright and breezy Trust Fall. Each of the eight songs programmed is well crafted, formatted carefully so that peaks of tension and resolution are placed strategically, as if they’ve been plotted on graph paper first. To get the building block of a song correct is the key to writing, and it is rarely by accident that a chorus is extended, rhythms altered, or an instrumental passage dropped in to place as though part of a musical jigsaw. This is collective writing at its best,and this is a band that is unlikely to suffer from a lack of material. 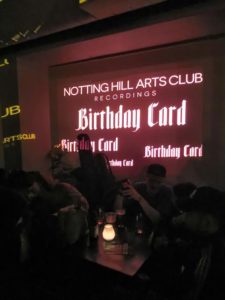 Charlie, next on the set list, bristled with brio. It might be a Beatlesque character pastiche or a frenetic tumble by Madness, but it is also a fully fledged Birthday Card signature hop and flooded with fun. Two sequence of four chords pulsate rapidly in turn, a musical knitting machine where no formal resolution is offered; it becomes clear that the song can be halted only by poking a stick through its bicycle spokes – midway when Charlie “hits the dance floor” (not very well, we can assume!) or after the line of exortation that serve as its makeshift ending. Throughout this song Josh Saw weaves his lyrics, starts them at seemingly arbitrary points of the song’s cycle to make playful mockery of its otherwise rigid musical frame. Saw has an innate sense of lyrical shape that makes this tune bounce like a tennis ball and ricochet wittily as it ducks and dives with the beat. The ever-changing backing track adds flourish and musical flesh to the words – Tom Ritchie’s bass line, for instance, stoically glued to the root of each chord, yet littered with throwaway subtlety along the way as he accentuates the word “gospel” (as in “it must be gospel”) or plays a rogue note to suggest the coda.

Next was DOA, a bold song that is mesmeric, trance-like, stubbornly so as if in denial of a heavy reality (in fact it recounts the nightmare of a fatal car crash). It gathers momentum with foreboding: a circular drum pattern offers us support to steady ourselves, but the relentless throb of a bass note on the second beat of each bar does all it can to foster disquiet, a guitar and synth chime in unison but in shapeless patterns above the dark lyrics. The release of a subdued dance sequence is temporary, the unsettling opening resumes with a voice more fierce and stressed than before, and its end sees Saw posture defiantly to the audience. This is a song of substance that might elevate the band’s profile beyond the constraints of a pop vogue, but then Patience, a number nestled casually between the band’s two imminent releases, suggests theatrical potential which, as an improvisatory tour de force, can only get better with every outing. We are left with the distinct sensation that this isn’t a band striving to be different, rather this is a band actually being different. This song swells with intensity, tense already from its muted beginning; a slow train of four plangent, doleful chords goes round and round the track, Josh Saw’s pent-up outpourings become a dizzy helter-skelter of Freudian free fall. The build up is masterful, a rocket launch anticipated at the outset by a plucked guitar countdown, but the fuse wire is lit by masterful synths that send the song out of orbit and into the stratosphere. This is controlled explosion that needs vision to pull off, certainly a dramatic confidence and technique to have any effect, but by the time Saw crashes to the floor, his frame hunched with pain, a whirligig of chaos and musical catastrophe envelops him and us, the highlight of the evening. The song started life as an experimental finale: the music is allowed to dissolve into feedback as the band walk off stage. (Miles Davis’ celebrated exit at the Isle of Wight in 1971 comes to mind.) 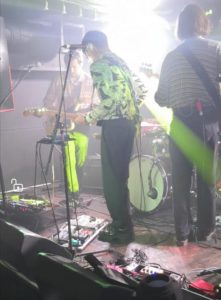 At the tail end of the set came Shy Away and its B-side, Talk Talk, songs that are complementary, the perfect calling card for a band on the rise. Shy Away is a digital boogie, its dancing rhythm chained to the bass guitar’s morse code pattern. Guitar and then synth sparkle in the background and this riff accrues rhythmic complexity and excitement; added later is a gravelled undergrowth of sound that rustles the feathers of the saccharine vocal. All gives way to a halo of feedback above the catchy instrumental break: this is four minutes’ worth of the perfect pop song. To balance this number’s various (ambivalently subtle) voicing in a club setting proves still to be problematic, but when mastered it is set to be a festival favourite with its swirling caterwaul of sound.

Talk Talk at first kids us that it is a ballad, but is interspersed with a high octane, chanted chorus, a cluster of vocals reminiscent of 10cc’s I’m Not In Love. Its emotional push and pull, exploited in the last verse, is breathtaking, and its musical economy pays dividend with a high tide of heart-rending relish – the line “who was there when you needed kindness” will send a shiver down any spine. It is deeply effective and might derive from a personal backstory. Josh Saw’s best impersonation of a choirboy encapsulates its ambiguity: he is both innocent and all-knowing. Talk Talk is the group’s strongest song.

The gig closed with the first outing of Joy Ride, a likely second single. Its deceptively simple tune rattles over the speed limit like a tin can on a piece of string tethered to the boot of a car, as it gets caught in dead ends, twists with intemperate gear change, and finally snaps in a seat-of-the-pants wheel spin of joy. The perfect paean for the metaphor of the open road and the endless possibility ahead, the masthead of this band. 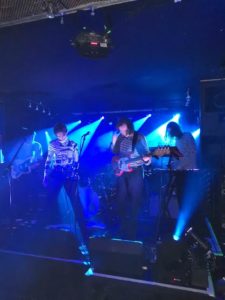 A band is often summed up by its lead singer. Josh Saw, a chorister manqué with the twinkle of a latter-day Paddy McAloon overdosed on a soothing throat lozenge, has the potential to become the real deal. For now his role might be to add burnish to the band, and Birthday Card may develop yet as a true spinning wheel of five characters. In time Saw will shine even brighter than he does, but for now he acts as the quiet, still centre of attention rather than the band’s greedy apex, and he turns this natural and endearing modesty to extreme advantage. His are the demotic song lyrics, but his true letter of marque is to place them to the lilt and flow of the natty, inventive music given him, and he is exceptional at this.

This group has humped its sound system up and down the M40 (not such a joy ride), knows its stuff, does what is smart, and is hell-bent on success. Shy Away, when released first under the band’s own steam, caught the attention of Matty Healy of The 1975; Jamie Oborne, head of Dirty Hit Records, then tweeted his interest. The current, definitive version is identical in almost every respect, except it has had the mercurial production of Mike Spencer – think Tom Walker, Will Young, Kylie Minogue’s clutch of worldwide hits, Jamiroquai, and many others. Birthday Card is ready for its next level. Theirs is an ambitious sound, and it sounds like the future of pop music to me. 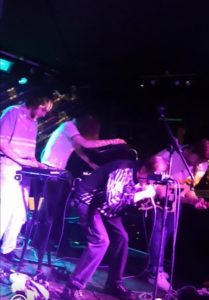 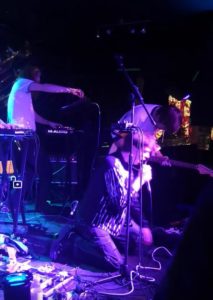 This entry was posted on 31st December 2019 by Dennis Harrison in Uncategorized.