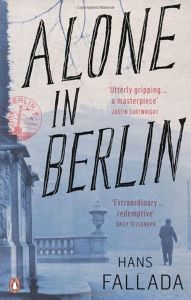 HANS FALLADA was published by Melville House only in 2009, Penguin thereafter (translated by Michael Hofmann). He is a recent invention in the English-speaking world, and a surprising commercial success. Fallada finished Alone in Berlin, considered his best book (and he was pleased with it), seventy years ago last month. It was written in 24 days only, just three months before his death and in the midst of his addiction, hospitalization, poverty and depression. It reads at times perhaps as reportage and was based on a true story of a working class couple who became part of the Resistance as response to their young son’s death at the war front. Cheerful.

Fallada’s timeline could have been lifted from The Archers on a cold and rainy day when The Bull pub was shut, the teabags all gone and the cattle had run amok, listener ratings are undoubtedly down and drama was called for at the end of each day’s episode… 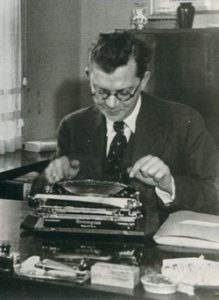 Hans Fallada was run over by a horse and cart aged 16 and then kicked in the face by the horse; he contracted typhoid a year later which led to a lifelong drug addiction, particularly morphine; troubled by public reaction to his emerging homosexuality, he botched his first suicide attempt when 18 although shot his best friend dead; he was acquitted as insane, then to spend the rest of his life in and out of asylums; also time spent in prison (never more than a three year stretch) for petty theft; relief from an unhappy marriage was sought (his attempts to murder either of his two wives failed), so he undertook a disastrous affair; his publisher fled Germany and the disapproval (even occasional imprisonment as an “undesirable writer”) from the Nazi hierarchy led to nervous breakdown, alcoholism and poor book sales; mind you, his decision to stay in Germany throughout the 1930s and then during the war led to strong criticism later from the likes of pious Thomas Mann. On the bright side he lived ’til he was 53, though his manuscripts were lost posthumously.

Why not cheer up somebody you don’t like this Christmas? Buy them one of Hans Fallada’s novels. Wrap it in mistletoe, which of course is parasitical, stunts the growth of its host plant in the wild, and is poisonous in our living room.