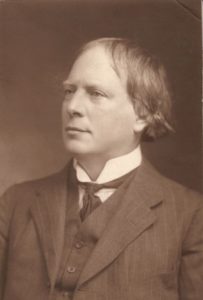 ARTHUR MACHEN’S LITERARY REPUTATION in his lifetime was considerable. As recognition of this he was awarded a Civil List Pension for the last fifteen years of his life, and in 1943, four years before he died at the age of 84, the literary appeal launched to address his frail finance received the support of, among others, George Bernard Shaw, T. S. Eliot, Max Beerbohm, Algernon Blackwood, Walter de la Mare and John Masefield. Wilde, Bram Stoker, Arthur Conan Doyle and W. B. Yeats are some of the ardent contemporary devotees who held him in high regard; Paul Bowles, Sylvia Townsend Warner, Alesteir Crowley, John Betjeman and Jorge Luis Borges are some of the figures for whom he was a significant influence later, as well as any number of successive horror and fantasy writers, from H. P. Lovecraft to Stephen King. He was a forerunner of psychogeography, for his vivid prose relates the landscape as in a symbiotic relationship with the mind: the Gwent landscape and mythology influenced not only his interests but also his writing.

Machen produced no substantial body of work – the Caerleon Edition of his collected works, produced in 1923, ran to nine volumes only – and seemingly he was all but spent as a writer by the age of 40. But in a sense he can be said to represent a distillation of the literary world of the 1890s, even though he never contributed to Henry Harland’s The Yellow Book. His bohemian spirit, fixation with the arcane (in his case the mystical rather than the occult), and the period’s decadent and gothic aesthetic are prominent in his writing. And in many ways he was a literary prototype for the twentieth century: he presaged the commercial cascade of the literary world, as novel writing fractured into various genres.

The Great God Pan was inspired by Machen’s visit to a ruined pagan temple in Caerwent, east of Newport. The book defies category and has been held to be an example of either Gothic horror or supernatural pagan fantasy or science fiction. The title had obvious points of reference for its late-victorian audience. It was borrowed specifically from a refrain from Browning’s poem ‘A Musical Instrument’, but had echoes of use from other poets, Swinburne and Stevenson among them.

ARTHUR MACHEN (1863 – 1947) was the pen name of Arthur Llewellyn Jones. He was born in Caerleon, Monmouthshire. His father’s side of the family were clergymen, but a lifelong interest in the esoteric was fostered, it seems, when, aged only eight: Machen read an article on alchemy from a volume of Dicken’s Household Words found in his father’s library.

An income of sorts was found to support his writing, through early work as a journalist and cataloguing books for bookseller and publisher, George Redway, who was based in London; also he translated for Redway from French (his translations of Marguerite de Navarre and Casanova were literary models for decades after). It is said that during this period of his life, Machen lived on dry bread, tobacco and green tea. His first publication was a poem published anonymously. He used a pseudonym for his first book, The Anatomy of Tobacco which was published in 1884. By 1890 he had become more confident and ambitious, and started to move in literary circles, in part through his wife’s connections with London’s bohemian circles (he married a music teacher, Amy Hogg, in 1887), in part through his abandonment of his hitherto pastiche, antiquated style of writing. Machen’s short stories, mostly in the vein of Robert Louis Stevenson, began to be published in more sparky literary magazines. By now he was less dependent on his journalism, as a meagre financial independence followed the modest endowments received now from his wife’s family.

What was to become the first chapter of The Great God Pan was published in 1890 in The Whirlwind; its third chapter was published in the following year. It was only later that Machen thought to connect these two disparate pieces, and most of the other chapters of the novella were written at one sitting. The book met with rejection initially, but was published eventually by John Lane’s Bodley Head in 1894, whose Keynotes Series was a standard bearer for the aesthetic movement; Aubrey Beardsley provided the cover illustration. The unfavourable attention the book received on moral grounds did not especially harm its sales. A year later, The Three Imposters was published, a threaded collection of short stories, the most anthologised of which are The Black Seal and The White Powder.

After the Oscar Wilde scandal and its moral backlash, Machen’s association with what were seen to be decadent forms of writing slowed his career; to place his writing with mainstream publishers proved difficult. The White People, now considered a classic horror short story, was not published in a magazine until 1904, and it appeared in book form only in 1906. The Hill of Dreams, an autobiographical novel that many consider to be Machen’s greatest achievement, had been written between 1895 and 1897 (during the time of Wilde’s trial), but it was not published until 1907.

Machen had suffered a steep depression after his wife’s death in 1899, and his literary energies suffered catastrophic damage. A collection of short stories, The House of Souls, appeared in 1906 but little new writing of note was published thereafter. Machen wrote some propagandist fiction during the First World War; he wrote The Secret Glory also, though this was published only in 1922. During this time he developed an acting career and continued with his journalism.

The early 1920s saw a revival of interest in Machen’s work, especially in the United States where James Branch Cabell and Carl van Vechten championed him. This renewed success was short-lived and not financially rewarding (he had sold previously the rights to much of his writing). Machen’s later years were sociable but produced no work. He moved from St. John’s Wood to a retirement in Amersham and leafy Buckinghamshire.

He continued with his interests in Celtic religion and the Grail with more rigour after a spiritual awakening in the early part of the 1900s. Machen’s worldview changed subtlety over years. In his later life he was reconciled with a High Church Anglicanism, but at heart he was a medievalist and disapproved strongly of the Reformation (he felt mostly at ease with Catholic ritual). He was emotionally opposed to science and materialism, and essentially he was a sensual mystic. His hotchpotch belief was culled from a variety of sources, from the Kaballah to Hermeticism, alchemy touching on aspects of the occult, above all else from Celtic Christianity; his friendship with the mystic poet and esoteric A. E. Waite was both enduring and influential. Machen’s overriding imprimatur however was his quest for ‘ecstasy’, the “rapture, beauty, adoration, wonder, awe, mystery, sense of the unknown, desire for the unknown.” His literary theory was presented in his tortuous book Hieroglyphics (1902), too ornate and prolix for today’s taste (Machen was no essayist). He applied this search for ‘ecstasy’ to the writers he admired most – Cervantes, Johnson, Dickens, Poe and Stevenson – and to the world he portrayed in his writings. Also to the world he himself inhabited: “Ecstasy,” wrote Machen, “is at once the most exquisite of emotions and a whole philosophy of life.”

The Great God Pan, although it sold well, was considered at the time of its publication to be a degenerate work. Its implicit sexual content, noted Oscar Wilde, allowed it to become “un succès fou.” It was written in 1890, but published in book form in 1894. Machen’s writing career stalled not long after, as tragedy in his own life conspired against him, also a change of attitude in the cultural climate. After a re-evaluation of his writing from the 1920s, his influence on other writers became considerable. Stephen King referred to The Great God Pan as “maybe the best [horror story] in the English language.”

Caradoc Evans thought that Machen only wrote that which God chose to write through him. At its best, Arthur Machen’s prose style sparkles and can be beautifully lyrical.