6th February, 2020, 7.30pm @ The Sandspout
Christian Garrick (violin) & David Gordon (piano)
£10 entry [to include a free glass of wine and interlude refreshment]
To reserve a seat please contact the Bookstore

Chris Garrick is without doubt the world’s finest jazz violinist. He is at home in a South Bank recital hall performing with his great friend Nigel Kennedy, or a seedy jazz club; or indeed a seedy bookstore. He is much feted, much recorded, much in demand. Dave Gordon is a regular member of Chris’s quartet, a jazz vampire by night and a leading classical harpsichordist by day. Here they are performing together at the Albion Beatnik Bookstore, Oxford. 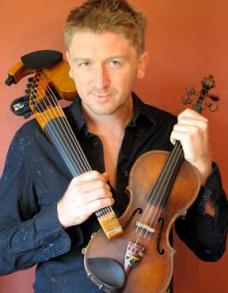 CHRISTIAN GARRICK began violin at the age of five. He covered the technical and traditional side of his instrument at school through the Suzuki Method, progressed through the Associated Board exams, reaching Grade 8 by his early teens; he studied at London’s Royal Academy of Music, gaining first-class honours in his Performers’ Degree also winning the DipRAM in his postgraduate year. At home, his famous jazz pianist father, Michael Garrick, introduced the colours, flavours and rudiments of improvising music, gave him a starter-repertoire of tunes. At the age of 8 he met Stephane Grappelli at The Stables, who influenced him and his playing enormously. Chris has recorded seven solo albums of which Different Strokes was called “The outstanding British album of the year” in the Sunday Times. 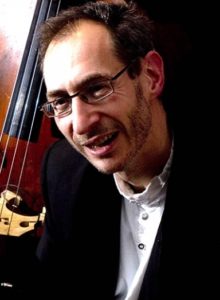 DAVID GORDON could have been a boring maths teacher, but things went wrong when he discovered fun could be had being a musician. He was harpsichordist of the English Concert, and since 2008 has been a harpsichord soloist, composer and jazz pianist. This musical variety has allowed him to be compared to a box of Milk Tray, though he is more likely to be the choccie with the soft centre, steely outer edge and colourful wrapper, certainly not one of those awful coconut creams. Lately he has taken composition more seriously and has been proved to be a dab hand with some serious commissions. An interview from his website. 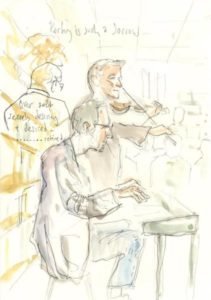 No jazz duo works better in a small bookshop than violinist Christian Garrick and pianist Dave Gordon. Theirs is a bright and shimmering sound, complementary and dovetailed, well rehearsed as they have ridden shotgun for each other over decades. They listen to each other at all times; either of them could play back the notes that ring if you drop a tray of cutlery (I’ve even done that mid-performance). They have that urgent quality that fills the space and a bustle that keeps you tapping your toes. Here they are in the Albion Beatnik performing Duke Ellington’s It Don’t Mean A Thing If It Ain’t Got That Swing (the closing riff is from John Dankworth’s big band arrangement of that tune).

The violin is a troubled instrument in the history of jazz in spite of its proud history. Ellington, for example, used it to add to his orchestral colouring (in fact Ray Nance made a speciality of It Don’t Mean A Thing in the Ellington bands of the 1940s and 1950s); yet today it can sum up the great divide between the notated, prescriptive score and the earth moving and carefree freedom that is the stuff of jazz. Classical maestro Yehudi Menuhin teamed up throughout the 1970s with the French jazz icon Stephane Grappelli. Menuhin would arrive in the studio hours ahead to prepare his score thoroughly; Grappelli would breeze in late, casual, unprepared and with a grin, only to ask what they were playing and in which key. It shows in this TV recording: Menuhin’s rehearsed lines and serious demeanour somewhat at odds with Grappelli’s lackadaisical aspect.

There haven’t been that many noteworthy jazz violinists. Joe Venuti is the clan’s founding father, Eddie South, Stuff Smith and a few others followed. Grappelli and, I guess, Jean-Luc Ponty since then have made the headlines, Europeans both, and this might tend to suggest the violin is to be associated with a white man’s jazz learnt at school, slightly footnoted and not the stuff of hard living. (It has also been chain ganged to the guitar.) It would not be true however that violinists are generally a moral, clean-living bunch of folk who grow their own vegetables; the resin used to supple their bows, for instance, can be of notorious content.

Chris Garrick is unusual in that he has sound classical provenance – outstanding achievements as an early teen and at the Royal Academy, at home on the South Bank, often performing with Nigel Kennedy who is a friend from childhood – but is a seasoned jazz trooper also: he is the delta of both a musical disquisition and musical delinquency. David Gordon is a vampiric jazz entity at night and a strait-laced classical musician by day, in fact an erstwhile continuo harpsichordist for Trevor Pinnock’s baroque English Concert Orchestra. His jazz playing hums, ricochets from floor to ceiling with thumps of joy. If there is perversion in his style, it is all his own for he is the master of his own idiosyncrasy (and that is a rare compliment to pay a jazz pianist).

Chris and David’s recent album together, Paper Jam, combines the disciplines of their formal study with the outrageous brio and swank that makes a true jazz performance the “sound of surprise.” The early jazz musicians honed their craft like prizefighters, often during after hour cutting sessions in rent houses where fierce individuality was fed by pyrotechnic abandon. This spirit of early jazz is here on this new recording by them: two lone voices pitted against each other and with no bassist or drummer to provide a resting point along the way. There is a sense of danger and exposure with the very skeleton of their improvisatory craft on display. And when not prizefighters, Chris and David are cowboy gunslingers, urgent and dangerous both. Their pedigree of cattle rustling and gaming houses (or scales and music theory at their various academies and kaleidoscopic experience as jazzers) has led to this shootout at the OK Coral. The gold standard of such shootouts, of course, is Louis Armstrong and Earl Hines’ recording session of 1928, Weather Bird its apogee, where rivalry, ego and tension underpin but are washed away by a bucketload of rapport: call and response, cryptic copycat and overt playfulness abound.

With Chris and David we have two musicians who are supple enough technically to exploit this provocation, but also full to the brim with ideas. But it is one of the wonders of the jazz art that although its lineage is provocation, its lodestar is engagement. Together, Chris and David cavort as though a complete jazz orchestra with its full palette of sound – but incredibly with only catgut and a few chopsticks. Chris cascades and skinny-dips, David dives or bellyflops. We have joy, we have skittishness, the lingering, tender phrase and the throwaway thrill. We are taken from the Anglican (David Gordon’s chillingly beautiful English Isobars or William Walton’s account of Shakespeare), to the blues and back to the New Orleans cradle of jazz, the bebop bounce of Bud Powell, clever stuff from the late English pianist John Taylor, some Tin Pan Alley, Burt Bacharach’s sixties pop parade, and the embrace of world music – sambas, mambos and the hubbub of a South African township as heard by Abdullah Ibrahim. This duo has the energy and timbre to fill either a living room or a concert hall. It is always the most amazing of treats to hear them perform together, here on CD, or even better in person.

Here is English Isobars from the album.

And here are the duo again filmed in my defunct Oxford bookshop, captured by a mobile phone while seated on a  plank of wood: another rendition of Stevie Wonder’s Isn’t She Lovely and Antonio Carlos Jobim’s Samba de Uma Nota Só, made a worldwide hit in 1962 by Stan Getz and Charlie Bird.

Simply put: Chris and David’s is a musical craft that makes you glad to be alive. 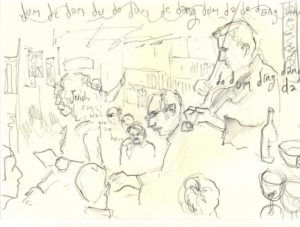 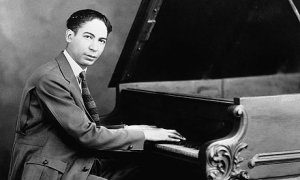 “By and large, jazz has always been like the kind of a man you wouldn’t want your daughter to associate with.” – Duke Ellington

“Jazz washes away the dust of every day life.” – Art Blakey

“…it bugs me when people try to analyze jazz as an intellectual theorem. It’s not. It’s feeling.” – Bill Evans

“I hate straight singing. I have to change a tune to my own way of doing it. That’s all I know.” – Billie Holiday

“What’s interesting about a person without problems?” – Carla Bley

“Wow! What funky music!” – Kenny G on entering an elevator

Jazz has often attracted a bad press. In the 1930s, when the BBC learned of the origination of “Jelly Roll” Morton’s nickname, it declared that if his records had to be played, he should be introduced as J.R. Morton, as though he were a middle-order Surrey batsman! He was, in fact, at various times, a pimp, gambler, pool shark and hustler as well as a composer and pianist and one of the early jazz greats. Morton claimed to have invented jazz, but its true origins are more than hazy, built on myth as well as each storyteller’s self-interest. The band on any night here at the Beatnik don’t give too many hoots about such questions; their pre-occupations may range from “do we have to play it in this key?” to “is this all we are being paid for the gig?”, but they have a steely determination to play the music as though it should be enjoyed – because they enjoy it! Jazz is a vibrant, life-giving music, to be, in fact, enjoyed.

In jazz, of course, there is no such thing as a wrong note, only a wrong feeling. When you arrive, please forget any footnoted prejudice and savour the music for what it is: each night’s performance will consist of real jazz, described by the critic Whitney Balliett as the “sound of surprise.” This sound is not harmful.

During any performance, if you wish to irritate those who share your row or table, please feel free to click your fingers, stomp your feet or squeal with delight. To applaud any soloist of whom you approve is enshrined in bookselling law. During the interval, do not feed the musicians: they prefer to starve, which is why they play jazz. However, do feel free to talk to them for they are very enthusiastic about what they do. Please do not ask if jazz musicians can read music (they do it wonderfully well). And, yes, they can play back by ear any notes you care to whistle at them, so behave.