A Town Like Alice [1950]
Neville Shute (1899-1960)
Set in Malaya at the time of the Jaopanese invasion, Jean Paget assumes leadership of a convoy of women and children prisoners marched through the jungle. She bonds with an Australian prisoner.

The Dark Lantern [1951]
Henry Williamson (1898-1935)
South East London in the late nineteenth century. We begin to follow the life of Richard Maddison. This is the first of a brilliant sequence, A Chronicle of Ancient Sunlight, by one of the most ignored yet most brilliant of English writers, whose politics did him no favour.

A Question Of Upbringing [1951]
Anthony Powell (1905-2000)
The first in a twelve-volume work, A Dance To The Music Of Time, which was completed in 1975. A trio of boys, friends at a nameless school (based on Eton), and a fourth figure who stands slightly apart from them, and their differing paths and maturity.

The Day Of The Triffids [1951]
John Wyndham (1903-1969)
Science fiction written in the shadow of the Cold War: paranoia reigns, and bio-warfare and global mass destruction are used. When Bill Masen wakes up in his hospital bed, he has reason to be grateful for the bandages that covered his eyes the night before, for he finds a population rendered helpless by the blindness that followed the spectacular display of bright green lights that filled the night sky; a population at the mercy of the Triffids.

The Masters [1951]
C.P. Snow (1905-1980)
The eleven-novel sequence Strangers and Brothers spans the life of its narrator, Lewis Eliot, barrister, and took over thirty years to write. Snow describes the rarefied worlds of academia, Cambridge, the Jewish community and Westminster. This book is concerned with the dying Master of a Cambridge college and the intense rivalry of the other fellows as the election looms. Not the finest stylist, but absorbing and able to sweep the reader along in the wake of the narrative, redolent of its time.

Molloy [1951]
Samuel Beckett (1906-1989)
Written in French, the tale of Molloy, old and ill, begets a double plot involving a private detective sent to search him out, whose own deterioration during the quest shadows that of the hero. The book ends typically in confusing vein: “Then I went back into the house and wrote, It is midnight. The rain is beating on the windows. It was not midnight. It was not raining.” First part of a triptych that includes Malone Dies and The Unnamable. 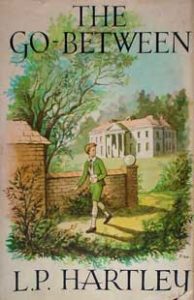 The Go-between [1953]
L.P. Hartley (1895-1972)
Young Leo, while staying with a friend one hot summer, becomes drawn deeper and deeper into a dangerous game of deceit and desire as he acts as a messenger between a farmer and a beautiful young woman up at the Hall. A haunting story and if Hartley was not the greatest of novelists, this is a fabulous book to be remembered by.

Lord Of The Flies [1954]
William Golding (1911-1993)
A plane crashes on a desert island and only schoolboys survive. Order fades, and their behaviour begins to assume a murderous, primitive, and savage significance. 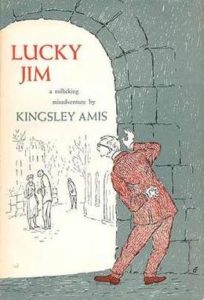 Lucky Jim [1954]
Kingsley Amis (1922-1995)
A young, reluctant, medieval history lecturer at a provincial university is making his way in a post-war world that fuses new and moribund attitudes. A classic comedic tour de force and an absorbing love story.

The Cone-gatherers [1955]
Robin Jenkins (1912-2005)
A haunting story of love and violence, and a powerful examination of class-conflict, war and envy, hinged upon a gamekeeper’s act of brutality. An overlooked masterpiece.

Our Man In Havana [1958]
Graham Greene (1904-1991)
Wormold is a vacuum cleaner salesman with an expensive adolescent daughter. When offered extra income for part-time, amateur espionage, his fake reports generate more excitement than anticipated.

Room At The Top [1957]
John Braine (1922-1986)
An ambitious young Joe Lampton orphaned and from a humble origin, makes the most of his time as a POW in the Second World War, studying for his accountancy exams. We see his attempt to reconcile his social aspiration, silver tongue and its tragic consequences, as he plays love against ambition. One of a spate of novels about northerners on the social rise – other authors including Stan Barstow (see below) and (the much underrated) David Storey, a trend of writing supposedly part of the Angry Young Men school.

A Glass Of Blessings [1958]
Barbara Pym (1913-1980)
A comedy of manners, unusually frank for its day in its discussion of homo-sexuality, as Wilmet Forysth, comfortable and leisured, philanthropic and vaguely innocent, comes to terms with the realities of love.

Goldfinger [1959]
Ian Fleming (1908-1964)
The seventh James Bond novel although for the first time Bond’s personality is more than sketched out and is presented as not just the saviour of the world, but as a complex character with his own thoughts. Prepare to be shaken but not stirred.

A Kind Of Loving [1960]
Stan Barstow (1928-2011)
Often dramatized, the first in a trilogy that follows Vic Brown move from a mining town to London, marry and divorce; the first lad-lit novel possibly.

Cain’s Book [1960]
Alexander Trocchi (1925-1984)
Written in America, this is an extraordinarily truthful (autobiographical) account about a junky’s life. It was prosecuted in Britain for obscenity in 1965, and can still shock today. Trocchi’s novels were published mostly in Paris by Olympia Press under pen names.