Howard’s End [1910]
E.M. Forster (1879-1970)
Written at a time when established values are threatened by urbanization, Sisters Helen and Margaret take different paths in life – Margaret is practical and led by her head, whereas Helen is much more of a free spirit and takes her own road.  Forster’s debates about wealth and poverty or country life and urban sprawl would not be out of place today. 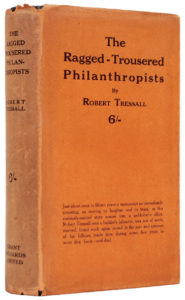 The Ragged-Trousered Philanthropists [1910/14]
Robert Tressell (1870-1911)
This is a timeless story of Socialism, class struggle and political awakenings, told with a volatile mix of heartfelt rage and sly humour. A semi-autobiographical novel published after the author’s death in 1911. Its rejection by three publishers depressed the author who wanted then to burn the novel; his daughter saved it by keeping it in a metal box under her bed.

Of Human Bondage [1915]
W. Somerset Maugham (1874-1965)
Maugham insisted “this is a novel, not an autobiography, though much in it is autobiographical, more is pure invention.” Like Maugham, its hero Philip Carey is orphaned and brought up by his pious uncle; for Maugham’s stutter read Philip’s clubfoot. We follow Philip Carey’s travels, his intellectual and emotional development, and witness his destructive relationship with Mildred, a self-centered, crude waitress, who torments him with her rejection. 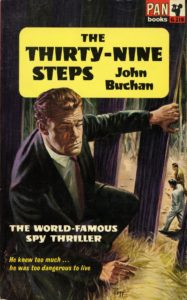 The Thirty-nine Steps [1915]
John Buchan (1875-1940)
The seminal ‘chase’ thriller, rapid and vivid, highly influential and frequently filmed and dramatized. It features Richard Hannay, an all-action hero, early model for the stuff of cinema idols, who even when cornered, manages to escape.

The Return Of The Soldier [1918]
Rebecca West (1892-1983)
Set during World War I on an isolated country estate, we follow an amnesic and shell-shocked captain, as he makes a bittersweet homecoming to the three women who have helped shape his life.