I HAVE LEFT MACHYNLLETH clock tower and am headed north. I brace myself to balance as the bus bends and bobs. The fractal blur of tarmac that carves its way through the steep valley incline to Dolgellau has waterfalls hanging either side that drop like pearl earrings. Vistas open and close as we wend our way, hills and peaks appear that might stretch forever if it weren’t for the horizon. Above is the stuff of a trance-like beauty that fills your heart with joy whenever it is seen: a net of sky with a rich palette of azure, periwinkle and powder blue tufted like soft parchment, splashes of tangerine and carrot, purple prose streaked with puffs of chiffon cloud. What I witness is a beautiful, beatific tableau. I manage to take in some of the detail along the way – the trees that menace the side of the road like highwaymen, the sheep that meander on the slopes above, the walls that course either side of the road with bricks topsy-turvy. 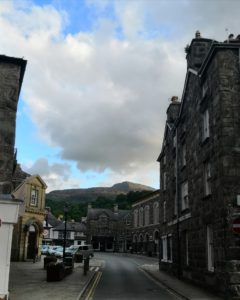 The bus has rattled all the way to Dolgellau; I am shaken and step wearily onto the kerb. Reflex takes me first to the main hotel where I drink coffee, and I gaze upwards to Cader Idris, the mountain that stands sentry-like over the town. It is said that anyone who sleeps alone on the slopes of this ancient stronghold, which is shaped like a chair and has a scree summit and surround of supposedly bottomless lakes, will wake as either madman or poet. I am not sure I could tell the difference, having spent the previous dozen years arranging poetry readings in Oxford: tongues of fire on Idris flaring. As I sit, grandiose fancy takes hold of me a passing moment: I will rise early each morning and march my way to the mountain top. Then, for some strange reason, I remember Mr. Roberts, my school PE teacher (and Welshman), who against my will made me shimmy up gym walls. Instead, I recline in my padded chair, sip more coffee and rest pleasurably at ease, plump and ready to ward off thoughts of any brisk exercise ahead.

DOLGELLAU, ONCE SPELT DOLGELLEY, sits in the sparse, verdant lands of south Snowdonia wrapped in a coat of many grassland colours. The geological mayhem of sedimentary rock, volcanic ash and igneous intrusion that comprise Snowdon itself is more than impressive. The tender landscape in these parts may be interpreted to be more the hair of the dog that bit, not the dog itself, but it will bark politely if you tell it that. It is in modesty that beauty can be found best, and there is a sprinkle of the divine when you walk from the outskirts of the town in any direction. For sure, God smiled on this jigsaw of farming land. 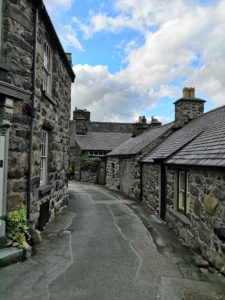 Modesty can be found, too, in Dolgellau’s slapdash sprawl of suburban design. However it is not ordinary, anything but: it contains well over 200 listed buildings, the densest collection in the whole of the United Kingdom. Each wall has a patched hopscotch pattern of stone, like the chalked graffiti of school playtime; this creates a maze of vertical playgrounds that can be claustrophobic in places. In 1798, Rev. J. Evans wrote that Dolgellau’s “streets were irregular and very narrow, and the houses small and ill lit.” Thirty years after this rather mean observation, an urban focus had formed to foster a less haphazard shape of settlement. This kicked off after the town’s first bank was established in 1803, and Eldon Square – where I am sitting outside the Ship Hotel – became its overhauled nexus. The town’s concentric orbit, its cross-hatched labyrinth of thoroughfares, cut throughs and up-ways, is strung like a lasso. These routes are threaded by severe dolerite brickwork and slate roofs that are slung low, like cloth caps that tumble, often askew; all are decorated with chimney stacks. Flowers in pots and bunches of curated wild flower, colourful doorways and lattice-worked porches offer relief.

The town developed, I think, more by individual munificence than by communal resolve. At some point in the nineteenth century Dolgellau’s aspect of civic compliance and neighbourly agreement took shape. The penal reformer John Howard had visited the town in 1773 and was concerned by the state of the gaol. Prisoners not long after after petitioned about maggots and other “nasty filth in the water,” drawn from the River Arron which was used to wash sheep skin. But less than a hundred years later, the gaol was closed for good because of a dearth of occupants. Sin is a different thing, but crime was seemingly done away with here.

The town’s economic well-being rested historically on wool and tanning; many of its major houses are converted mills. Tanning is messy business and the stench would once have travelled via the drains all over town; Dolgellau earnt its nickname of the ‘stinky town’. Other scratch attempts to employ a workforce had been fitful. And then the Welsh gold rush. The lode was discovered in 1860, was mined rigorously from 1884 and closed in 1998 when pollution and health and safety made it all too costly. Royal wedding rings from 1934 were made from the mine’s bounty, Her Majesty has still a nugget of this prized Welsh gold. A new lode was discovered recently and a lengthy task to obtain permissions to reopen the mine has started. The latter-day prospectors are housed in the building next to my shop. I have determined to dig a tunnel into its vault (and if I surface in its toilet rather than its vault, I shall be crestfallen). 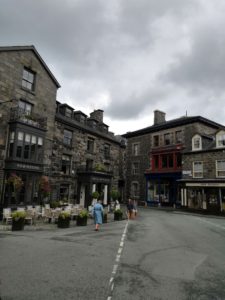 By 1900 the gold and also copper mines gave employment to 500 miners. The town’s most successful retailer, the ironmonger T H Roberts, made a fortune from selling panning utensils. This shop, with its four enormous first floor windows that gape like a quadraphonic Cyclops, has still its original floor to ceiling stained pine shelving, its counters and accounting room. These shelves are no longer littered with shovels and pickaxe but jam and coffee: today it is a splendid café that serves a breakfast to die for. The ceilings are high so it is always a cold building, and a winding staircase leads to a first floor overspill. Second floor offices might be above but who knows. Eye-catching buildings often disappoint, and many of the piles in Dolgellau will be ridden with damp or in need of propping up.

Adjacent to Roberts is Siop Hughes, an outfitter and fashion emporium. It buys still its cloth from Manchester as it always did; opposite it stands London House, so-called because it would source all its goods from London. Siop Hughes opened in 1854. The sixth generation runs the business now but the grandfather still works there, back seat but still modestly proprietorial and expansive. Without any prompt he reminisces of childhood fears when Roberts the ironmonger kept dynamite in its cellar. Perhaps it this fear of exploding sulphur that encourages Siop Hughes to scatter Biblical tracts amongst the underwear stand and umbrellas at the shop entrance; there is also a forbidding sense of the eternal amongst its nylons. Twice every Sunday, poorly attended, it resurrects itself as a makeshift Baptist Church. 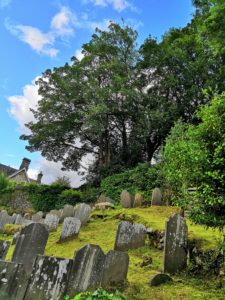 Standing on a paved eyrie above the town’s concourse to look down on the sunken vale of the town, you can glimpse its holy spaces of devotion and its hushed graveyards with no dominion but many denomination: the parish church, a Catholic enclave and a plethora of Nonconformist, Methodist and Baptist chapels, one built for every step of the Welsh revival that set to in 1859 and culminated in 1905. A concertina of worship, birth, baptism, wedding and death. I count ten holy spaces, many others, I am told, long closed. At one point in the street and if viewed from the correct angle, you can see a cake stand of belief. Its pedestal in the street below is Methodist, square and solid, well founded with bricks and cement folded like sponge; at eye level is a small Nonconformist chapel (now a dentist), improvised in design and spread on the side of the road like clotted cream on a scone; above, and perhaps not the best iced cake, is a Bethesda, an unattractive church building listed for residential sale.

Dolgellau is a small community yet it contains a kaleidoscope of offer. Everything from a microwave to linoleum, wool for knitting, chocolate cracknel, paints, pots of lovage, a drill from the builder’s merchant, jewellery or canisters of gas can be found. A self-sufficiency of sorts. This small-town tented village is, I imagine, a summary of what I ignorantly construe to be a Welsh ethos of self-containment. I do not know yet, of course, and I might be very wrong. It has shovelled out coal and its rich mineral load, but there appears to be little need to broadcast its true cultural self. It is a circular contentment, satisfied to exist only within its own footprint.

Today it is possible that only shepherds and milkmaids might have all-year employment. Many run a B&B or are occupied with seasonal tourism. Its shops are impressive. But there is much empty commercial space which over the years it must have pulled on and off like oversized long johns, as the town has struggled to balance the needs of its meagre population (2,688 listed in the census of 2011) and its summer tidal wave of backpackers and day trippers, cyclists and mock mountaineers.

My shop has been empty, off and on, for some years. The front door is repainted, and it revealed six different layers of paint beneath: a palimpsest of trade. Above is its fascia board which is like a stack of playing cards – trading names resting on top of each other. A few have called in to speak their memories of working here – hairdresser, antiques, haberdashery, charity, a slalom ride of business offer that has crashed to bookshop – and all suggest that nothing had worked convincingly since the sweet shop of yesteryear, its longest use as far as I can gather. Alas books can barely compete with sherbet, and liquorice is tastier even than a complete set of Dickens. How the bookshop – it is an office space, too, a living room also, no doubt, and a space to programme live jazz and poetry – will fare is uncertain, of course. 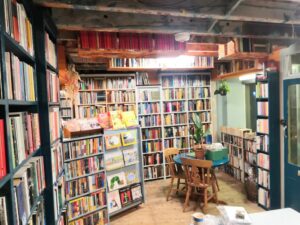 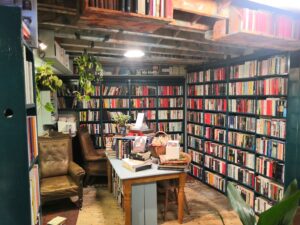