A coptic bound book with ABP endpapers, stitched by Lucie Forejtova of Immaginacija – a brilliant artisan brand of bespoke stationery designed for every day use rather than as the fodder of interior design (although they are beautiful products as well!) – for the Albion Beatnik Press.

This is the first full poetry collection by local poet George Roberts. 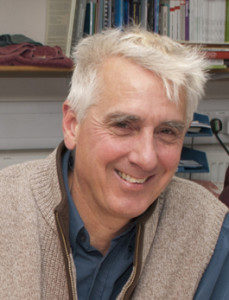 George Roberts was born in Philadelphia, USA in 1953 into a Navy and then Foreign Service family. He went to ten schools and eventually four universities, and as a consequence (and penance) he lectures now in educational development at Oxford Brookes University. From 1974 to 1987 he worked as a chef, while getting a BA and subsequently masters degree from Oxford University in English language. He got a second masters degree in education from the Open University in 2001 and a PhD on adult community learning from Southampton University in 2011. He was a community education tutor from 1987 to 1989 before becoming a training materials editor and subsequently training consultant in the international energy industry from 1989 to 2000, travelling to Nigeria, Kazakhstan, Russia and many other countries. He has lived in Oxford since 1983. He started writing poetry in school, inspired by William Carlos Williams and e e cummings. Throughout his various jobs in various cities he always sought out and participated in local community poetry groups. He was Secretary to the Oxford University Poetry Society in 1985-86. His poems have appeared in small journals and for many years he focused on spoken word performance style poetry, most notably with Hammer and Tongue.