This story was based on Crane’s own experience in early 1897; it was published in Scribner’s Magazine later that same year. Crane, sailing to Cuba, was shipwrecked and sailed to shore on a small boat with two other men, one of whom drowned when their boat capsized. H. G. Wells assessed it to be “beyond all doubt” the crown of Crane’s oeuvre, which included The Badge of Red Courage, the most famous novel of the American Civil War. Crane died when only 28. 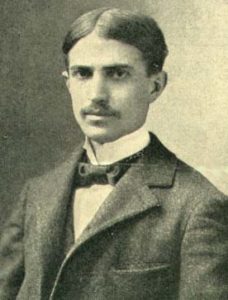 STEPHEN CRANE (1871 – 1900) is regarded now as one of the most original writers of his generation; he was a poet, novelist and short story writer. He taught himself to read before he was four, although he did not excel as a student; he declared college to be a “waste of time'” and left to become a writer. He was attracted to slum life, whose characters he found to be “open and plain, with nothing hidden.” His first novel, Maggie was self-published, and was about a prostitute. (His reputation was ruined later by his involvement and mishap in the arrest of an alleged prostitute.) The Red Badge of Courage, published in 1895, was the result of an obsession with war. His intention was to write a “psychological portrayal of fear,” and it met much success. He settled in England where he befriended Joseph Conrad, H. G. Wells and others. Poverty and ill health (he suffered several severe pulmonary hemorrhages) led to a premature death.

You gotta be bonkers not to love Barbara Pym’s novels. Her acme was 1950s suburban or neo-rural settings where The Archers doesn’t quite meet James Bond, coz you don’t get the offstage milking of cows, and if the tea is stirred, well it’s never shaken. The stories thrive off crinoline and matching cruet sets, cups of tea, but also sheer delight; they offer shelter from today’s rather boorish age.

So here I identify as a spinster, a bit starchy coz am a clergyman’s daughter and rather prone to fantastical romance, though I sort of get my end away with an anthropologist before the book closes (though it’s the church pew that moves, course, not the earth). I don’t identify that well, have to say, hence the tea spilt in the saucer (note that the cup and saucer don’t match, Mildred Lathbury would never have allowed that, not for guests anyway), my cacophonous spoon tapping, the pub patois at the end, the hairy, unkempt fingers, the size 11 denture mark on the lemon drizzle cake, though I did shave this morning coz probably Marlon Brando’d have done that – it’s called method acting (though bugger the bit about tidying the kitchen).

Excellent Women was Pym’s second novel published, a gentle, parochial version of the Keystone Cops: no truncheon or police car siren of course, but a true comedy of manners that revolves around mistake, mishap and flaw.

All Pym’s novels are in the Sandspout, laid out like pots of jam at the church summer fete. If you don’t like her style, well all I can say is Divine retribution will come your way: it’s very likely that the doily napkins in your kitchen pantry will flutter at night – they must exist, they’re probably for sale next to the pudding basins in Boswell’s – and they’ll put a dead fly in the jam you spread on your scone. Or I will…