The Luck of Roaring Camp & Other Stories
Bret Harte

Bret Harte became famous for his depiction of life in the Californian Gold Rush, romanticising a world that was nasty, brutish and possibly short. His stories have the hallmark of later Western adventures: melodramatic or sentimental plot lines involving both rough terrain and rough-and-tumble, square-jawed fist fighters in bar brawls, loaded sarcasm and shooters, dialect (phoney or otherwise), and stereotypical characters – greedy bankers, good-natured gamblers, pious preachers and kindly prostitutes. His writing centred on the Humboldt River and Nevada — an area referred to as ‘Bret Harte Country’. 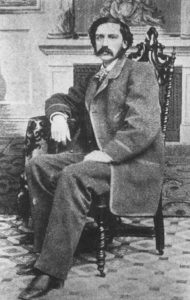 BRET HARTE (1836-1902) finished his schooling at 13. He was born in Albany, New York, but moved to California in 1854 where he was employed as a teacher, miner, messenger and journalist. His life reads as improbable as any other well read, intelligent. ambitious man at that time, but one constant was his ability to make enemies, perhaps unwisely but it would seem rarely without consideration. When 24, as a temporary acting editor of The Northern Californian, he reported in caustic tone of a massacre of Wiyot Indians: “a more shocking and revolting spectacle never was exhibited to the eyes of a Christian and civilized people. Old women wrinkled and decrepit lay weltering in blood, their brains dashed out and dabbled with their long grey hair. Infants scarcely a span long, with their faces cloven with hatchets and their bodies ghastly with wounds.” He was forced to move away from the area after he received death threats, but even when settled in San Francisco he was to publish an anonymous letter of condemnation. When commissioned to edit an anthology of Californian poetry in 1865, the finished volume contained only 19 poems. Harte cited the state’s “monotonous climate” as the reason for its bad poetry; he attracted much derision locally, although the observation was well received elsewhere.

In 1868, as editor of The Overland Monthly, a new literary magazine, he published his short story The Luck of Roaring Camp, which shot him to nationwide fame; it was published in a first and very well received volume of short stories in 1870. A satirical (and, at the time, misinterpreted) poem, Plain Language from Truthful James (colloquially known as The Heathen Chinee), added further notoriety. Harte, chasing the dollar and a more solid literary life, moved back with great applause to the East, to New York in 1871, later to Boston; Mark Twain observed wryly that he “crossed the continent through such a prodigious blaze of national interest and excitement that one might have supposed he was the Viceroy of India … or Halley’s Comet…” (Twain and Harte were great friends initially and had collaborated on a play; Twain regarded Harte as his mentor. But they fell out rather dramatically, Twain then to observe that “Harte is a liar, a thief, a swindler, a snob, a sot, a sponge, a coward, a Jeremy Diddler, he is brim full of treachery…”) Harte negotiated a substantial annual fee from the publisher (Fields, Osgood & Co.) of The Atlantic Monthly, an unprecedented sum of $10,000 for 12 stories. His good fortune did not hold, Harte became depressed, stalled on his writing as its quality declined, his career slumped and he struggled for work; between 1873 and 1876 he managed to publish only seven short stories; he found himself in debt.

Harte moved to Europe in 1878, first as a United States Consul in Germany, then in Glasgow (“To send this nasty creature to puke upon the American name in a foreign land is too much,” lamented Twain); in 1885 he settled in London. He spent 24 years in Europe, writing prodigiously and successfully though not lauded as before. His European sojourn became permanent but his time there was spent alone. He sent money home but was never reunited with his wife and children; one early biographer had suggested that Harte’s wife was “almost impossible to live with.” Bret Harte died in London in 1902.

However far he strayed in subject matter, he was always known for, and frequently returned to, telling stories of the Californian Gold Rush. He monetised the Wild West and made it palatable to the rest of America. He was a literary John the Baptist who prepared the way for the less genteel genre of the Western, John Wayne and Bonanza. Included here are seven of his best tales.

… from THE LUCK OF ROARING CAMP

There was commotion in Roaring Camp. It could not have been a fight, for in 1850 that was not novel enough to have called together the entire settlement. The ditches and claims were not only deserted, but “Tuttle’s grocery” had contributed its gamblers, who, it will be remembered, calmly continued their game the day that French Pete and Kanaka Joe shot each other to death over the bar in the front room. The whole camp was collected before a rude cabin on the outer edge of the clearing. Conversation was carried on in a low tone, but the name of a woman was frequently repeated. It was a name familiar enough in the camp,—“Cherokee Sal.”

Perhaps the less said of her the better. She was a coarse and, it is to be feared, a very sinful woman. But at that time she was the only woman in Roaring Camp, and was just then lying in sore extremity, when she most needed the ministration of her own sex. Dissolute, abandoned, and irreclaimable, she was yet suffering a martyrdom hard enough to bear even when veiled by sympathizing womanhood, but now terrible in her loneliness. The primal curse had come to her in that original isolation which must have made the punishment of the first transgression so dreadful. It was, perhaps, part of the expiation of her sin that, at a moment when she most lacked her sex’s intuitive tenderness and care, she met only the half-contemptuous faces of her masculine associates. Yet a few of the spectators were, I think, touched by her sufferings. Sandy Tipton thought it was “rough on Sal,” and, in the contemplation of her condition, for a moment rose superior to the fact that he had an ace and two bowers in his sleeve.

It will be seen also that the situation was novel. Deaths were by no means uncommon in Roaring Camp, but a birth was a new thing. People had been dismissed the camp effectively, finally, and with no possibility of return; but this was the first time that anybody had been introduced ab initio. Hence the excitement.

“You go in there, Stumpy,” said a prominent citizen known as “Kentuck,” addressing one of the loungers. “Go in there, and see what you kin do. You’ve had experience in them things.”