The Garden God: A Tale of Two Boys
Forrest Reid

The author started this novel when at school, but it was published in 1905 when the author was thirty years-old. It was the second of sixteen published novels by Reid, who is regarded often to be the first significant novelist to come from Ulster. The book was met by controversy, as it was a tale of schoolboy homoeroticism. Forrest Reid dedicated it unwisely to Henry James who, greatly offended when he read the book, never spoke to its author again. 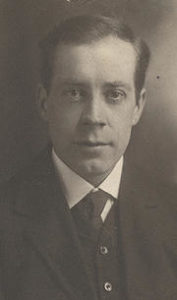 FORREST REID (1875 – 1947) is considered often to be the first truly great Ulster novelist. He wrote sixteen novels, two autobiographies and a string of literary criticism, essay and biography. He graduated from Christ’s College, Cambridge in 1908, although it seems the only worthwhile experience he had at the University was to come under the spell of E. M Forster; the two remained friends for the rest of there lives. Reid reacted to his Protestant upbringing, and, like many of his time, developed a unique strain of paganism that incorporated a mysticism that emanated from his local landscape.

Reid, alongside J. M. Barrie and Hugh Walpole, is known as a leading pre-First World War novelist of boyhood and adolescence, although his telling of boyhood is both realistic and unsentimental. In this respect he can be seen as an Irish counterpoise to James Joyce: his coming-of-age novel set in Protestant Belfast, Following Darkness (1912) — a book that disturbed its first audience, with its portrayal of a young boy’s sexual awakening and disavowal of Christianity — can be read as a foil to James Joyce’s  A Portrait of the Artist as a Young Man (1914-1916), a depiction of growing up in Catholic Dublin.

Reid’s last novel, Young Tom, was critically his best received; it was awarded the James Tait Black Memorial Prize in 1944, and is the third volume in a trilogy concerning a young boy, Tom Barber.

Bernard O’Donoghue’s poetry collection The Seasons of Cullen Church (Faber, 2016) is lyrical and observant, an elegiac lament, beautiful so often, riddled with memories of a childhood spent near Cork.

Bookshops were very much part of Bernard’s youth, a journey to Cork often only a pilgrimage to visit them. Connolly’s Bookshop in the centre of the city had fought many commercial battles; it closed in 2014, a casualty of a changing world that made less sense of local community.

(This video was filmed in a previous bookshop.)