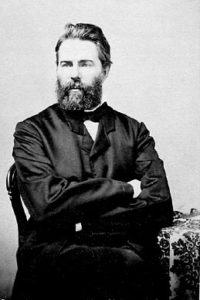 HERMAN MELVILLE (1819 – 1891) finished his schooling at 13 when his father died. He took to sea aged 20, first as a merchant seaman then as a whaler, but he jumped ship in the Polynesian Islands. This experience he turned to his financial advantage: his novels Typee (1846) and Omoo (1847) were embroidered retellings of his time there. More seafaring tales followed to little acclaim, culminating with Moby-Dick (1851), perhaps the greatest novel ever written, but received poorly by critics when published. In the mid-1850s Melville wrote short stories for magazines; in many ways his writing then was even richer than before, as he experimented with narrative voice and subtext. Bartleby, The Scrivener (1853) and the other short stories included in this book all date from this period; The Piazza Tales was published in May 1856. Melville moved to New York and worked as a customs inspector; he focused on poetry. His last published prose was in 1857, though Melville did return to fiction at the end of his life — the novella Billy Budd remained unfinished at his death.

Melville’s career is a study in decline: early success in the 1840s was followed by a precipitous career drop, and he was all but forgotten when he died. After the First World War, the avalanche of Modernist hybrid aesthetic recognized his kaleidoscopic vision for what it was: sharp shards of genius.

I AM A rather elderly man. The nature of my avocations for the last thirty years has brought me into more than ordinary contact with what would seem an interesting and somewhat singular set of men, of whom as yet nothing that I know of has ever been written:—I mean the law-copyists or scriveners. I have known very many of them, professionally and privately, and if I pleased, could relate divers histories, at which good-natured gentlemen might smile, and sentimental souls might weep. But I waive the biographies of all other scriveners for a few passages in the life of Bartleby, who was a scrivener of the strangest I ever saw or heard of. While of other law-copyists I might write the complete life, of Bartleby nothing of that sort can be done. I believe that no materials exist for a full and satisfactory biography of this man. It is an irreparable loss to literature. Bartleby was one of those beings of whom nothing is ascertainable, except from the original sources, and in his case those are very small. What my own astonished eyes saw of Bartleby, that is all I know of him, except, indeed, one vague report which will appear in the sequel.

Ere introducing the scrivener, as he first appeared to me, it is fit I make some mention of myself, my employees, my business, my chambers, and general surroundings; because some such description is indispensable to an adequate understanding of the chief character about to be presented.

Imprimis: I am a man who, from his youth upwards, has been filled with a profound conviction that the easiest way of life is the best. Hence, though I belong to a profession proverbially energetic and nervous, even to turbulence, at times, yet nothing of that sort have I ever suffered to invade my peace. I am one of those unambitious lawyers who never addresses a jury, or in any way draws down public applause; but in the cool tranquility of a snug retreat, do a snug business among rich men’s bonds and mortgages and title-deeds. All who know me, consider me an eminently safe man. The late John Jacob Astor, a person-age little given to poetic enthusiasm, had no hesitation in pronouncing my first grand point to be prudence; my next, method. I do not speak it in vanity, but simply record the fact, that I was not unemployed in my profession by the late John Jacob Astor; a name which, I admit, I love to repeat, for it hath a rounded and orbicular sound to it, and rings like unto bullion. I will freely add, that I was not insensible to the late John Jacob Astor’s good opinion.

Some time prior to the period at which this little history begins, my avocations had been largely increased. The good old office, now extinct in the State of New York, of a Master in Chancery, had been conferred upon me. It was not a very arduous office, but very pleasantly remunerative. I seldom lose my temper; much more seldom indulge in dangerous indignation at wrongs and outrages; but I must be permitted to be rash here and declare, that I consider the sudden and violent abrogation of the office of Master in Chancery, by the new Constitution, as a—premature act; inasmuch as I had counted upon a life-lease of the profits, whereas I only received those of a few short years. But this is by the way.

My chambers were up stairs at No.—Wall-street. At one end they looked upon the white wall of the interior of a spacious sky-light shaft, penetrating the building from top to bottom. This view might have been considered rather tame than otherwise, deficient in what landscape painters call “life.” But if so, the view from the other end of my chambers offered, at least, a contrast, if nothing more. In that direction my windows commanded an unobstructed view of a lofty brick wall, black by age and everlasting shade; which wall required no spy-glass to bring out its lurking beauties, but for the benefit of all near-sighted spectators, was pushed up to within ten feet of my window panes. Owing to the great height of the surrounding buildings, and my chambers being on the second floor, the interval between this wall and mine not a little resembled a huge square cistern.

At the period just preceding the advent of Bartleby, I had two persons as copyists in my employment, and a promising lad as an office-boy. First, Turkey; second, Nippers; third, Ginger Nut. These may seem names, the like of which are not usually found in the Directory. In truth they were nicknames, mutually conferred upon each other by my three clerks, and were deemed expressive of their respective persons or characters. Turkey was a short, pursy Englishman of about my own age, that is, somewhere not far from sixty. In the morning, one might say, his face was of a fine florid hue, but after twelve o’clock, meridian—his dinner hour—it blazed like a grate full of Christmas coals; and continued blazing—but, as it were, with a gradual wane—till 6 o’clock, P.M. or thereabouts, after which I saw no more of the proprietor of the face, which gaining its meridian with the sun, seemed to set with it, to rise, culminate, and decline the following day, with the like regularity and undiminished glory. There are many singular coincidences I have known in the course of my life, not the least among which was the fact, that exactly when Turkey displayed his fullest beams from his red and radiant countenance, just then, too, at that critical moment, began the daily period when I considered his business capacities as seriously disturbed for the remainder of the twenty-four hours. Not that he was absolutely idle, or averse to business then; far from it. The difficulty was, he was apt to be altogether too energetic. There was a strange, inflamed, flurried, flighty recklessness of activity about him. He would be incautious in dipping his pen into his inkstand. All his blots upon my documents, were dropped there after twelve o’clock, meridian. Indeed, not only would he be reckless and sadly given to making blots in the afternoon, but some days he went further, and was rather noisy. At such times, too, his face flamed with augmented blazonry, as if cannel coal had been heaped on anthracite. He made an unpleasant racket with his chair; spilled his sand-box; in mending his pens, impatiently split them all to pieces, and threw them on the floor in a sudden passion; stood up and leaned over his table, boxing his papers about in a most indecorous manner, very sad to behold in an elderly man like him. Nevertheless, as he was in many ways a most valuable person to me, and all the time before twelve o’clock, meridian, was the quickest, steadiest creature too, accomplishing a great deal of work in a style not easy to be matched—for these reasons, I was willing to overlook his eccentricities, though indeed, occasionally, I remonstrated with him. I did this very gently, however, because, though the civilest, nay, the blandest and most reverential of men in the morning, yet in the afternoon he was disposed, upon provocation, to be slightly rash with his tongue, in fact, insolent. Now, valuing his morning services as I did, and resolved not to lose them; yet, at the same time made uncomfortable by his inflamed ways after twelve o’clock; and being a man of peace, unwilling by my ad-monitions to call forth unseemly retorts from him; I took upon me, one Saturday noon (he was always worse on Saturdays), to hint to him, very kindly, that perhaps now that he was growing old, it might be well to abridge his labors; in short, he need not come to my chambers after twelve o’clock, but, dinner over, had best go home to his lodgings and rest himself till teatime. But no; he insisted upon his afternoon devotions. His countenance became intolerably fervid, as he oratorically assured me—gesticulating with a long ruler at the other end of the room—that if his services in the morning were useful, how indispensable, then, in the afternoon?