Books To Visit A Shrink With

An Angel At My Table
Janet Frame

Janet Frame’s personal history has been well documented. She was misdiagnosed as a schizophrenic, scheduled for a lobotomy but the procedure was cancelled just days before it was due (her doctor had noted that she had just won a literary prize). Her autobiography traces her childhood in a poor yet intellectually vibrant family, life as a student, years of incarceration in mental hospitals, and salvation through the world of belles lettres(“my writing saved me”).

Frame’s novel, Faces in the Water, was a fictional account of her time spent in psychiatric hospitals, and is an example of why literature can be so overwhelming: the overlap between real life and the imagination. Janet Frame’s account of her life allows us to see how she accomplishes this “transformation of ordinary facts and ideas into a shining palace of mirrors.” But her writing (much like Sylvia Plath’s) is so often interpreted through her life and its fragility rather than for its own worth. Yet if we had known nothing of her life, would this have made her novels any the less well written and paced? The writer, it seems, is destined to lay bare their soul in every sentence, and perhaps it is this intensity that makes reading so compulsive.

If poets can be confessional – that is give away details of their lives which others of us might keep under lock and key, Robert Lowell or Anne Sexton are prime examples – then Bishop was reticent and discrete, if not silent; she observed the physical world with a masterful technique. She chastised Lowell for using letters from his ex-wife as material for some of his poetry (“aren’t you violating a trust?”), and if ever Bishop used personal or family material (In the Village is about her own childhood and her own mentally unwell mother), it is cloaked behind a third person narrative. All this is the antidote to psychiatric analysis.

Moreover Bishop was confident in who she was and what, if anything, she should stand for: she was defiantly resistant to what has become a modern obsession – identity politics, and she refused ever to be included in all-female or lesbian anthologies. She saw herself in fact as “a strong feminist,” but wished her poetry to stand on its own merits. 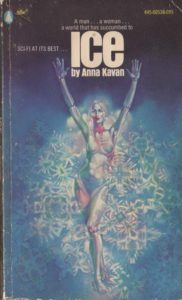 Anna Kavan had a remarkable life that could have threatened to overwhelm her writing. She had wealthy parents who were cold and displayed scant affection: her father committed suicide when she was thirteen, she loathed her mother but was financially dependent upon her; two marriages were disastrous. She painted bizarre studies of demented women and was a talented interior decorator, for which she gained attention: in 1950 she formed the architectural and design firm Kavan Properties, and through the 1960s renovated old houses in London, and designed and constructed her own final home. She was hopelessly addicted to heroin and amphetamines, suffered severe depression and breakdowns, was blighted by three botched suicide attempts and mental illness (two long periods were spent hospitalized). When found dead at home in 1968 with a syringe beside her, it was reported that her flat contained enough heroin to kill the whole street. All in all, her life should not be considered a contented one, and perhaps her novels were, for her, displacement activity and are as foreboding and chilling as her life; indeed they can become addictive. 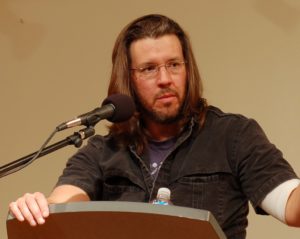 To read a sentence of David Foster Wallace, the most dramatic and fulfilling writer of the last twenty years, is to discover a man on the precipice, for his writing ganders chaotically like a studded skein of geese, with a literary lilt and cadence of a style that incorporated jargon and a promiscuous vocabulary, that featured abbreviation and acronym, lengthy multi-clause sentences littered with parenthesis, and an original use of footnote and endnote and often these were as expansive as the text to which they referred, albeit Wallace claimed that they were to disrupt the linear flow of narrative and to denote his perception of reality[1], although he admitted that to jumble up sentences would have done that[2], but would then render the text illegible, and so on. 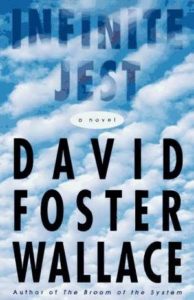 Infinite Jest, first published amazingly as long ago as 1996, is a long farrago of philosophical quest and comedy. “At no time while reading Infinite Jestare you are unaware that this is a work of complete obsession,” writes Dave Eggers, “of a stretching of the mind of a young writer to the point of, we assume, near madness.” Writing was indeed a maddening activity for Wallace. He looked for stylistic creativity and difference (he saw how he stood apart from mainstream literary America), yet that difference ultimately became a restraint as his personal well-being and creativity became entwined alarmingly. He had stumbled across creative writing almost by mistake. Reading Pynchon and Don DeLillo had turned his head; he came to discover that fiction could not only convey information (and lots of it, he loved Tom Clancy’s novels because they were stuffed full of facts) but also rival philosophy for making sense of the world. Novels for Wallace were, like life, full of “stuff,” invasive and threatening, yet joyful and fulfilling too. Earlier in his life he had withdrawn from writing because of the toll it took on his psyche. He had suffered from severe depression since college days, and an attempt to rid himself of its medication, which he felt stunted his writing, it is thought may have contributed to his suicide, aged 46, in September 2008.

Infinite Jest blends literary deceit and rule breaking as though guerrilla warfare, is a quizzing of the literary hierarchy and of the two-up two-down, bog standard novel, it throws out the baby and the bath water yet never throws a spanner in the mechanics of its grandstanding style. It is humourous wordplay and compulsive filigree writ large. Its setting is a tennis academy and an addict’s halfway house – these morph in Wallace’s personal biography: he popped pills and was quite a decent tennis player (Wallace’s own candescent writing on tennis were collected together and published last year, here is a wonderful essay, Roger Federer as Religious Experience) – and explores what the foibles and pleasures that we choose for ourselves choose to say about who we are. It was set in Boston where he had lived in the late 1980s and where, he wrote to a friend, he would “have laughs, listen to rap and James Brown.” It is, wrote James Wood, the “pursuit of vitality at all costs.” One of the most challenging books – it is both weighty and forbidding – Dave Eggers refers to it as a ‘duty’ read. Dunno about that, but Wallace, to my mind, is the writer who sums up best the late twentieth century age, its burgeoning information overload, its false sense of choice and entitlement, its lack of freedom and spontaneity. How odd then that he was tethered to the book in its physical form (also, most interestingly, he mixed writing longhand with typewriter typed and computer derived manuscript).

It could be the book most bought yet the most unread ever, good for a hundred pages, you get its gist and gristle by then, no need for the rest. Although come to think of it Proust betters that, as people buy it still but surely nobody gets past the first ten pages, I imagine, À la Recherche… isn’t even the sort of book to be seen reading. You would wish to be seen reading Wallace, for it has a hinterland of style, offers to writing what Habitat once offered the living room: chic. Also the end of dull, latticed lampshades with drop down doilies (which sums up Proust, most novelists today hang still their lampshades in similar vein).

[1] and the “best way to get the exfoliating curve-line plot I wanted”. Wallace had suggested endnotes – they “allow …me to make the primary-text an easier read while at once 1) allowing a discursive, authorial intrusive style w/o Finneganizing the story, 2) mimic the information-flood and data-triage I expect’d be an even bigger part of US life 15 years hence, 3) have a lot more technical/medical verisimilitude 4) allow/make the reader go literally physically ‘back and forth’ in a way that perhaps cutely mimics some of the story’s thematic concerns …5) feel emotionally like I’m satisfying your request for compression of text without sacrificing enormous amounts of stuff” – his editor settled on footnotes, though hundreds of pages were cut from the various drafts of Infinite Jesteven so
[2] to sentences admitted up although done would that he have jumble that