Books To Tie A Shoelace With

The Poverty of Historicism
Karl Popper

Dedicated to the memory of “the countless men and women of all creeds or nations or races who fell victim to the fascist and communist belief in Inexorable Laws of Historical Destiny,” the book is a criticism of the poverty of the idea of historical prediction, which can be (in the words of Wikipedia) split into three areas: “fundamental problems with the idea itself, common inconsistencies in the arguments of historicists, and the negative practical effects of implementing Historicist ideas.” Clever stuff, but the book basically destroys the myth that you can foretell history, and it destroys Marxist fundamentalism, for instance, and allows each of us to take huge and confident breaths of deep self-will. Shakespeare made the point rather more simply, Cassius in Julius Caesar declaring: “The fault, dear Brutus, is not in our stars, but in ourselves…”

This book is a great template for all reconstructive thinking, and Popper’s two volume The Open Society and Its Enemies was another masterpiece concerning political thought, whilst earlier work rattled the cages of scientists (who should be kept in their cages until fed to the lions). Popper is out of fashion these days, but in his day he was a freethinking original. 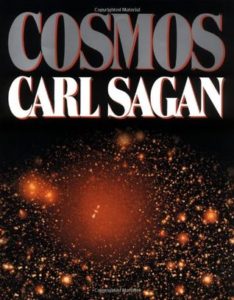 Christmas of yesteryear was a far more bookish festivity than it is today. A town like Oxford would once have housed few Christmas trees that didn’t have packaged underneath them at least one book for every member of the household. Our digital taste (and the low concentration level required to service it) has moved this on recently to a DVD under each tree. Television may be the architect of the dumbing down of the modern world but, at its best, it can open doors of intelligent thought unimag-inable to previous generations.

Sagan’s Cosmos, shown first in 1980, is the most widely watched (and perhaps most influential) of all television series, Delia Smith notwithstanding. It covered an impressive array of clever scientific stuff – the origins of life to a holistic perspective of our place in the universe of life. If you can mute the Vangelis soundtrack, it was highly visual and entertaining.

The last episode – Who Speaks for Earth? – took on New Age concerns, the stuff that keeps hippies awake at night after they’ve come back from Tesco’s in their Rolls Royce, unpacked their E-numbers, and counted their pocket money.

This year, apart from unnecessary things like world peace, a time warp wish list for Christmas could include a book under the tree for each member of the family and a return to tactile values. Bring some good cheer to your bookseller, for books remain much better value than cheap socks or naff perfume. 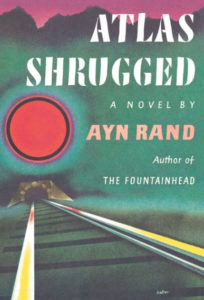 Rand had achieved success in 1943 with The Fountainhead, an ambitious novel; Atlas Shrugged in 1957 made her a household name, although the book itself was dense and in places unreadable and attracted damning review. Through depiction of a dystopian United States, and with elements of science fiction, mystery and romance, this is Rand’s most extensive fictional statement of Objectivism, her philosophical advocacy of reason, individualism, capitalism and the failures of governmental coercion. Rand has never gained a foothold in academic philosophy and her views are now largely derided, although nearly always by people who have never read her! That she is a philosophical contrarian and that she sought to portray her thought via fiction as well as academic tome – like B. F. Skinner, whose Walden Two is a revealing account of his theories of behavioural modification – make her appeal dramatic and fascinating.

Contrarian thought has been wonderfully expressed in book form, and the likes of David Icke, David Irving, David Duke and many others make fascinating psychological study.

My 60 Memorable Games is a lesson in objectivity and painstaking analysis, modestly also, for it detailed not just wins, but losses and draws also. Crucially it didn’t include 1957’s the ‘Game of the Century’ when, aged only thirteen and playing black against International Master Donald Byrne, Fischer sacrificed a queen and knight to unleash the most devastating attack and victory. A stampede of such intuitive brilliance, it is doubtful that Fischer himself was aware, and certainly not at the time, of the trajectory of his game logic and his rapid-fire moves. Even though the little audience that had assembled initially had dispersed, all and more were to clamour back to his table when news of Fischer’s bold gameplay spread in the hall faster than warm butter on toast. Its invention and excitement still bristle now. This game was the first step that transformed Fischer into a sporting superstar. By 1972 he was as likely to appear on the Bob Hope Show as on the cover of a chess magazine, but even in 1964 he was profiled in Time magazine after he had whitewashed his opponents in the U.S. Championship that year.

The book is now one of the devotional vade mecum of chess. Initially he was against publication of it in 1969. Then, as he felt the Rapture (end of the world) was nigh, he tried to make some easy money: a typical piece of Fischer opportunistic nutterdom.

The great chess players of the past are fascinating characters. Even if long dead and with an afterlife only of algebraic notation, they can impose themselves upon our imagination still. The dull as ditchwater yet entrepreneurial Howard Staunton, as lofty as a church mouse, giving his name to the chess set design that is still the standard; the dashing and romantic Paul Morphy, as unstable as a high wire artist in the wind, Fischer’s favourite; the mercurial, colourful Casablanca who could turn his opponent’s world on a sixpence; the inventive and instinctive Mikhail Tal, as fluffy and as nutty as a Walnut Whip, who played chess as though it were jazz. These are the deities of the chess pantheon, to be worshipped only by egghead devotees. It was Bobby Fischer who broke free of this closeted world. He came of age in the satellite era, and single-handedly he turned the game in to a newsworthy phenomenon, culminating with his World Championship victory in Reykjavík against Boris Spassky, a match that lasted nearly three months in mid-1972. Spassky was the leading Russian player of that era and the reigning world champion. This was at the height of the Cold War, and to some it was a cerebral replay of the Khrushchev-Kennedy match nearly a decade before. But to many impressionable youngsters – and many studied Fischer’s exploits under the bed sheets at night with a torch – the news as relayed each evening on the radio was more tense than any Cuban nuclear stand off. The build up to the match was like a tennis match with Fischer serving all the aces; these tortuous negotiations were saved at the bell by businessman Jim Slater who doubled the prize money. The match itself did not disappoint. If Spassky had been lazy in his preparation, Fischer was brilliant, psychologically hawkish, and, armed with a finely tuned game plan and a steely determination, was overwhelmingly dominant and ruthless at the board; if he didn’t quote Machiavelli – well not quite – he was well versed in Sun Tzu’s The Art of War. Throughout the match Fischer played with Spassky as though a cat with a mouse. Quite simply, Fisher took chess to places that other chess players could not reach. (Spassky himself, ever the sportsman, stood up from his chair after game six and applauded Fischer.)

Fischer was undoubtedly a genius, fuelled by a single-mindedness and excessive hard work. He was obsessed by chess from the age of six. He was a school dropout (“you don’t learn anything in school,” he said) who as a teenager taught himself several foreign languages so that he could read foreign chess journals. His rise in the game was inexorable: by the age of fifteen he was the youngest grand master and the youngest World Championship candidate and a superlative matchplay exponent. He was self-reliant too and from a tender age he made bold stands against all who he saw standing in his way – his outbursts even caused the qualifying tournament for the world title to be changed after he had called out Soviet gamesmanship. He was a one-armed bandit who, when he wished, always paid out. After a second, eighteen month retirement from the game, he returned in 1970 with new resolve, intent on winning the world title. During his retirement he had studied relentlessly and dined on the footnotes and minutiae of strategy like a whale hoovers plankton: Taimanov, who Fischer massacred in his 1971 quarter final of the World Championship Candidates match, was so overawed that he declared that Fischer’s “moves did not make sense.” The most brilliant streak of near-miraculous competitive play ever was unleashed as he swept aside all opponents with ease, as he stretched the imagination of what it was possible for a chess player to achieve. Not only did he number-crunch with logical abandon – he displayed unbelievable, cumulative genius – but he reacted on the hoof with instinct as well as encyclopaedic knowledge, intuitively supple always in his response to the unexpected. So aloof was he in his brilliance that he infrequently fell back on seconds, players who ride shotgun backstage during a match. (His teenage tutor, William Lombardy was his only second during the 1972 Spassky encounter; Spassky had a hotel suite full of them working on possible developments within each game).

Seemingly chess was Fischer’s only emotional language, and social alienation was a salient feature of his life. His temperament was like a random blunderbuss, primed to go off. In 1958 he outraged his Russian hosts when he demanded to play the world champion Botvinnik; four years later he accused them of collusion; he was chillingly petulant throughout his career, the bête noire of tournament organizers, falling out over money, itinerary (as a member of the Worldwide Church of God from the mid-1960s he refused to play on Saturdays, the denomination’s Sabbath), venues, which board he should occupy in team tournaments, anything that came to hand in fact. He should have won the world crown nearly a decade before had he not played chess truant – dropping out of tournaments or refusing to play, retiring for lengthy stretches of time; always he made demands on officialdom and organizers that could not be met, brinkmanship that was apt when at the board (he never accepted offers of a draw, knowing that his opponents would then see him as uncompromising and to be feared) but not so elsewhere. Often his fear of losing is cited as his reclusive rationale (I see this as nonsense). But in denial of his newly found rock star status, he forfeited his world title in 1975 when the logistical demands he made for the defence of his title stalled. He made a return in 1992 to replay Spassky, like two punch-drunk has-beens. Eventually Fischer became an exile and a degenerative nutcase who fell foul of the American authorities. He saw out his rabid last days in Reykjavík where he had been granted Icelandic citizenship in recognition of his world title win there.