Books To Prop Up Your Bed With 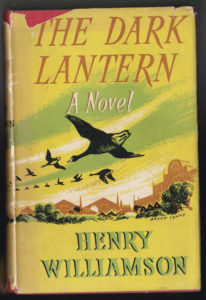 Henry Williamson was a brilliant writer, and yet very few of his novels, Tarka the Otter aside (its royalties funded his literary career), are referred to ever, and none of his heartfelt natural history writing seems to merit attention. In fact he blotted his commercial copybook and his afterlife assessment by his risky flirtation with Oswald Mosley, also his anti-Semiticism and his foolhardy admiration for the National Socialist party in Germany. The Dark Lantern is the first in a fifteen-book series which tracked the life of Phillip Maddison, A Chronicle of Ancient Sunlight. There is now some dissent to the negligence shown to Williamson, and the Henry Williamson Society is now flourishing (although cautious to announce that it is non-political!).

Other cycles of books include Mazo de la Roche’s family saga of sixteen-books, Jalna, C.P. Snow’s eleven-book political rigmarole Strangers and Brothers, Anthony Powell’s roman-fleuve twelve-book A Dance to the Music of Time, and twenty-eight-books of Angela Thirkell’s literary version of The Archers, the Barsetshire Chronicles. 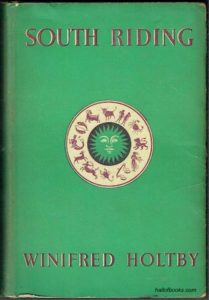 A perennial favourite, and for all the writing’s lack of finesse, essentially it is a narrative driven with a sense of its locality at its core. South Riding is a fictional name but based very much on Holtby’s lifelong experience of East Riding life. This is a moving portrait of a rural community struggling with the effects of the depression: Kingsport is instantly recognizable as Hull, and the mundanity of its local government is the heart of the book. (Holtby had taken council minutes from her mother’s wastepaper basket to help plot her story, and she had attended the public inquiry into a land purchase scandal in Hull.)

A rich seam of English writing between the wars is fiction in a local setting. Hugh Walpole had the Lakes, Lawrence his Nottinghamshire, Kaye Smith had her Sussex, and Louis Golding wrote of Manchester. As life in Britain migrated from the rural setting to the urban community, so to its novels identified, often abundantly, with their geographical hinterland and sense of place. As England’s sovereignty falters after the Second World War, this sense of locality deserts the novel, left to more popular genres only – Herriot’s accounts of a vet’s life, Phinn as school inspector, Derek Tangye’s rural idyll with dogs and geese.

To Serve Them All My Days
R. F. Delderfield 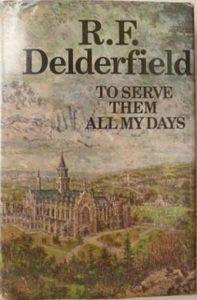 This book was a massive hit when filmed by the BBC in 1980, its strong story line ideal for the screen. Many characters are tours de force, and the hero, David Powlett-Jones, a coal miner’s son whose life is flecked in turns with both tragedy and triumph, tugs at the heartstrings of the reader.

One crucial aspect of the novel is its panoramic take on England’s social life of its time. The Ragged Trousered Philanthropists, Robert Tressell’s masterpiece, published posthumously (and much admired by Orwell) is a similarly engaging book. Fame is the Spur, Howard Spring’s epic page-turner that has been incredibly mostly out of print for decades, is the greatest of all political novels (in fact Spring is one of our greatest forgotten novelists, though to mention that to academics will only encourage a nonchalant or ignorant shrug). Richard Llewellyn’s How Green was My Valley is riveting and, for all its forged backstory (Llewellyn had never been to the mining villages), compulsive. 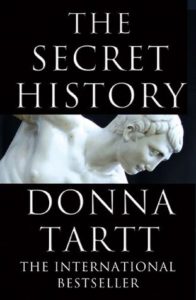 One of those first book  wonders and a bestseller. Published first in 1992, it was held soon to be a modern classic, essentially a whodunit in reverse as the murderer is revealed from the outset and we are left to work out why rather than who or how. The style is rich and florid, neo-romantic and with many allusions to classical culture and its language. And like the Ancient Greeks, fate is paramount: “Psychology is only another word for what the ancients called fate.”

It is a huge and impressive book with brio and immense ambition. And to back up its literary quality, Tartt herself is an unwitting master of marketing: her mystique, reserve and scarcity as interviewee and as writer act as magnets for fans’ devotion. Her succeeding novels, The Little Friend and The Goldfinch, were similarly huge in size. The Americans still have a taste for fat books – Jonathan Franzen’s The Corrections and Freedom charted well worldwide – and this scale of ambition is rarely matched in the United Kingdom, where 220 pages is still held to be adequate. Salman Rushdie still does his best but is in love with himself, and it shows.