Books To Fluff A Giggle Cushion To 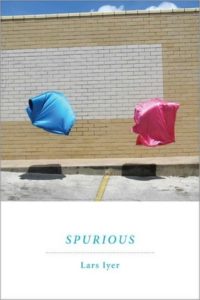 Lars Iyer is a former professional philosopher (a Wittgenstein specialist, but that’s still not a good opening line to use if on a date), though now he teaches creative writing, a much misunderstood academic discipline, designed especially for the hapless, the dole queue avoidant, and those late out of their beds each morning (although they do, at least, perform that act with their verbs well declined).

Spurious was Iyer’s debut novel and the first part of a trilogy of books, a humourous riffed work of wonder that will have you giggling like you were sat in the back row at school. The next volumes were Dogma and Exodus, books that galloped rather than cantered. They read as a modern sitcom, where character is the focus rather than the script or plot. So the books are riddled with in-jokes, catch phrase lines rather like the staid comic leitmotifs of a TV sitcom. The writing relies on timing and repetition more than any other construct, and, if bewildered at times by its detail, we realize that we are on the ‘outside’, non-participatory and bemused: this book is like a photo album stuffed with somebody else’s holiday snap shots, each one an alien experience, and a hoot: trust me, you will enjoy it.

Three narratives going on at once here, as “one beginning and one ending for a book was a thing I did not agree with” is the intent of its narrator, a nameless student. Metafiction is what is going on, that is a self-conscious literary device that defines the work as an artifact and undermines the authority of the author (also O’Brien’s interest in Irish mythology).

Graham Greene recom-mended it enthusiastically for publication by Longmans (“it is in the line of Tristram Shandy and Ulysses”), but it sold poorly, though it now holds iconic status.  O’Brien (real name Brian O’Nolan) was an odd man: alcoholic, a childless marriage to a secretary from the typing pool, eleven siblings who were each dependent financially upon him. At Swim-Two-Birds and The Third Policeman are true highlights of the twentieth century canon, although O’Brien is often spoken of as a part-time James Joyce. (Although O’Brien was a fan and influenced greatly by him, he wrote: “I declare to God if I hear that name Joyce one more time I will surely froth at the gob.”) 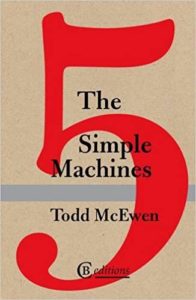 So you get the gag in the end, and it might be a bit tiresome to have ‘dik’ jokes recounted over 145 pages, but it’s a tour de force, stuffed full of friction and compulsion, rather like the masturbatory act. It is broken up in to six separate tales, each a variation on an aspect of the sexual act, so delicate and refined is the language that it is a variation in the deft style of Mozart and not the heavy-handed Busoni. Each chapter refers hilariously to the “six so-called mechanical powers – the lever, the wedge, wheel and axle, pulley, screw and inclined plane,” although the titles account for only five because, technically speaking, the wedge is only an application of the inclined plane, and we are told why. This book ripples with smart humour, its perspective and style clean and classical, and the author does in fact know exactly how long to run with each gag, riposte or observation. (He must be good at sex.)

This book is published by CB editions, the best poetry press and most enterprising of smaller publishers with personality, immaculate and well designed books, and, above all, a soul. The CB Press has had more retirements and comebacks than Frank Sinatra.

Marty Feldman is one of those curiously lost figures from a great era of British comedy, and his bookshop sketch, from the At Last the 1948 Show, is a highlight. He is a terrible and tedious customer (in a era that predates ours, when people were not routinely so stupid) in a well groomed bookshop (ditto). He asks for books that seemingly don’t exist. Well we imagine that they don’t. The shop assistant’s ears pounce on Marty’s request for Ethel the Aardvark… because he thinks he has it! But when it is found Marty Feldman hasn’t the money to buy it, and nor can he read it, he can’t read… Of course we see Marty as the Fool on the Hill, the man who, despite what others think of him, is really wise. The Fool on the Hill could be anyone of us, and that book we’ve been searching for all our life but don’t know the title… Yes it was written, and written just for you…