Books To Chew Bubble Gum To 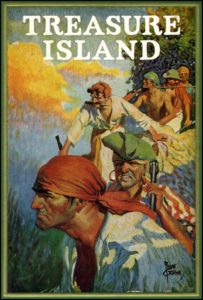 This is the precursor of the books today that are marketed to both adult and children (Philip Pullman, Mark Haddon et al). It is a white-knuckle ride, originally published in serialized form in a children’s magazine with brilliant literary devices and artifice. Jim Hawkins takes up his pen “in the year of grace 17—”, and Jim is a remarkably youthful and modest hero, impetuous and innocent, yet fair minded and wise; his reaction to all the other characters is a wonderful lead for our own. The book features a strong cast of characters, one of the earliest examples of product placement (leastways I assumed always that Ben Gunn worked for the Cheese Marketing Board), the Black Spot, treasure maps, mayhem, mishap and enough mystery and loose ends to live on in the imagination. Long John Silver still raises eyebrows: is he the hero or the villain of the plot? Stevenson’s working title for the book was The Sea Cook, and importantly Silver escapes at the end. Stevenson described him as being a man of “magnificent geniality,” best expressed in the “terms of the culture of a raw tarpaulin.” He is one of the very greatest of all literary creations. 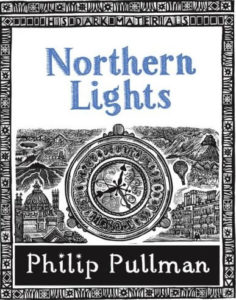 The finest series of children’s books published in recent times is His Dark Materials. It is a trilogy: Northern Lights, The Subtle Knife and The Amber Spyglass. Each can be reread many times, each time affording vital and fresh discovery. The rich tale is many layered, and this allows children of any age to extract as deep a meaning as they are able (or wish to); a more clever word might be allegorical. Pullman’s inspiration comes from archetypal myths, as well as from Milton and Blake. His aim is to create his own rich, if violent, fantastical universe; it is the best antidote to C.S. Lewis, a humanist riposte to the icing sugar tales of Narnia. The books are set in Oxford. Forget J.K. Rowling, against whom Pullman’s books were published head to head. His Dark Materials was appreciated and sold by the crate load, but had you asked any clever person in the 1990s (and by clever person, I mean bookseller!), Pullman was the name they would recommend. Its place in the canon is assured. 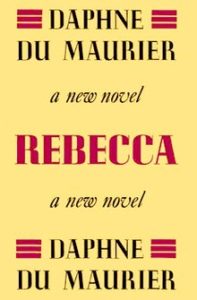 A monumental bestseller published in 1938, this is one of the great melo-dramatic stories, dripping with atmosphere and suspense, visual and dramatic. Sentimental (but in a haunting and melancholic way), this book is ideal for readers of all age with its strong narrative, but is especially a great introductory read for teenagers, leading them in to an adult world. A copy of this book was used by the Germans in World War Two as the key to a book code (sentences were made using single words in the book, referred to by page number, line and position); Rommel kept one copy of the book, the German agents infiltrated into Cairo carried another. Everlasting in the popular imagination are Mrs Danvers and the fictional estate of Manderlay, although V. S. Pritchett predicted in 1938 that the novel would be “here today, gone tomorrow.”

A similar successful entrée in to the adult world for a teenager is Dodie Smith’s I Capture the Castle. The first person narrator is Cassandra, who starts the novel as an observant teenager. Other good authors for teen readers are J. B. Priestley (The Good Companions  is bril) and W. Somerset Maugham.

On The Road
Jack Kerouac 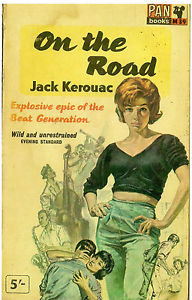 Whilst living a fairly dissolute life – a university drop out, a naval honourable discharge, arrest as an accessory to murder – Kerouac wrote constantly. On the Road was written in 1951 (though not published until 1957, pared down of its explicitly sexual matter, to instant acclaim) on a scroll in only three weeks without pausing to edit or revise and with no paragraphs or chapters. His style of Spontaneous Prose was based on his Buddhist studies and notions of jazz improvisation, especially the acrobatic flow of ideas inspired by bebop: his more or less unedited prose, delivered in a loose style of punctuation, is often said to be the literary equivalent of Charlie Parker’s ‘jazz licks’. Kerouac became, of course, a tremendous source of inspiration as Beats morphed into hippies, and as Bob Dylan and the Beatles held sway.