Books To Back A Racehorse With

The Private Life Of The Diary
Sally Bayley

Diaries keep secrets; they harbour fantasies and fictional histories. They are substitute boyfriends, girlfriends, husband and wives and sometimes children. Diaries indulge our fondness for self-dramatization and display, but in the 21st century, diary writing has been on the wane, the dignified space of the private diary has been replaced by a culture of public blurting. Young people are frequent users of online diaries or blogs, a clear indication that diaries, both online and off, function as workshops for building identities, coupled with the realization that you might need to go outside yourself to find an answer.

The book melds personal memoir and analysis. It’s a brilliant and discursive book that has much to say on how we curate ourselves as vital individuals. 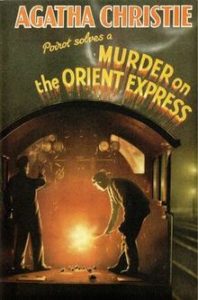 The glamorous Orient Express stops during the night, blocked by snowdrifts. Next morning the mysterious Mr. Ratchett is found stabbed in his berth and untrodden snow shows that the killer is still on board. This glamorous era of train travel provides Poirot (and “his little grey cells”) with international suspects and one of his biggest challenges. One of the greatest whodunit endings ever.

This was first a US serialization in 1933, and this gets to the stuffing of Christie: polite chunks of rehearsed action left on a refined cliffhanger, gentle as she goes. She wrote romances under the name Mary Westmacott, and 66 thrillers and 14 short story collections. Over two billion book sales list her behind only the Bible and Shakespeare on the all-time bestseller list; she is the most translated writer ever, and The Mousetrap is the longest running play ever!

The literary genre hides a multitude of sins and hosts a ragtag and bobtail of taste. High church or low, the serious reader should never write it off as the preserve of slovenly writing only. For all of Christie’s lack of mode, the likes of Raymond Chandler hit the high spots, The Big Sleep a big book in every way, Ian Fleming’s Moonraker also.

Miss Brodie attempts to provide a masterclass in moral tutelage. She describes herself as in “her prime,” able to educate six of her school students (“the crème de la crème”) in the ways of the world, in particular through her own personal love life and travels, appreciation of art and knowledge of the classics, and fascism. Ultimately one of her “set” betray her, although she never finds out who it is. The plotting is masterful: elements of the story are foreshadowed, introduced out of sequence, the narrator is omniscient, and its telling is driven by action and speech bubble, not much motive is delineated.

“‘Whatever possessed you?’ said Miss Brodie in a very Scottish way, as if Sandy had given away a pound of marmalade to an English duke.”

Spark’s next novel, The Girls of Slender Means, is another work of miniature brilliance. In her wake followed a whole genre of writing, dumbed down in many instances, Penelope Fitzgerald the best: try The Bookshop. 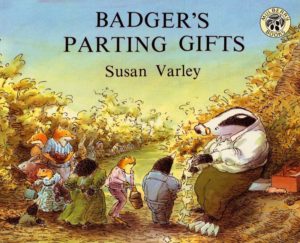 Badger is so old that he knows he will soon die. He tries to prepare his friends for this event, but when he does die, they are still grief-stricken. Gradually they come to terms with their grief by remembering all the practical things Badger taught them, and so Badger lives on in his friends’ memories of him.

To the grave we take our final selection of books: those we never have read or those we never even aspired to have read. A long tapering list of wasted time and opportunity, for the fact is that all books are wonderful and all take us outside of ourselves, a window through which we can gaze at a landscape of prospect, experience and imagination. If youngsters ever find themselves in a position where to read is considered naff, I suggest always to them that they get on with it and keep quiet. To stand up and be counted isn’t always the best thing.