A FAVOURITE KEEPSAKE OF MINE is a cutting from the front page of the Times in 1977. A small note of the comeback concert by Arturo Benedetti Michelangelo at the Vatican after many years of absence from the concert stage. The audience’s nervous clamour and occasional suppressed splutter is noted, for Michelangeli was notorious for walking off the stage at the drop of a hat. One of my great regrets is that I never saw Michelangeli perform in person.

The fabled pianist was notorious more for cancelling his own concerts than attending them. Michelangeli is a reclusive riddle wrapped in mystery inside an enigma. So enigmatic that his New York Times‘ obituary (he died in 1995 aged 75) observed that “little is known of his private life.” His will even forbad the public release of the details of his death.

For Horowitz, a great rival pianist, Michelangeli was “the great meshugunah” (“madman”). For sure, he claimed an ancestry from St Francis of Assisi, and he had the aristocratic habit of living in rented castles in rural Italy, each soundproofed so that nobody could hear his practice. And he practised like a madman, at times up to ten hours each day until his shoulders and back were stiff.

It is only conjecture that can join the dots of Michelangeli’s life, and it is only our imagination that can knit together the threads of his musical mind. Much of his musicianship remained guarded with secrecy. He gave very few interviews and he was a reluctant celebrity. His pupils tell us that he played virtually the gamut of the pianist’s oeuvre; his first wife assured us that he had achieved this by the age of twenty. Yet he chose to offer to the world only a condensed repertoire: five or six concerti and only three recital programmes which he globetrotted like an economy washing machine on repeat cycle. This is true distillation of genius perhaps. His perfectionism meant that relatively few recordings were released over his lifetime.

Michelangeli’s interpretations, especially of Beethoven (he programmed only two sonatas), might be both exotic and extreme; he sounds like a shepherd tending his flock on the hillside one moment, the next he sounds like a navvy at work with a pneumatic drill. Often Michelangeli lured you into his aural world before you were ready to appreciate it, perhaps to make you commit your approval before you came to your senses. He was most at home with repertoire that relied on a rich palette of colour, and seduction was for him an easy skill to master. He was never carnal however, he teased delicate sensuality from the piano like a snake charmer.

The mythology of Michelangeli was never exhausted. Titbit episodes from his life were selectively released to make good copy. Originally he had felt called to a lifetime of devotion and served in a Franciscan monastery for nearly a year, though he failed to take vows. He was a pilot in the Italian air force late in the Second World War yet chose to fight in the Italian resistance, and when imprisoned by the Nazis he claimed that they horse-whipped his hands upon discovery of who he was. He preferred to race his Ferrari in the Mille Miglia road race (he did this three times) rather than spend time in a recording studio; he indulged his skiing at championship level also. Then there was the dramatic occasion when he had a heart attack mid-performance and, slumped over the keyboard, was resuscitated on stage. He travelled to concerts not only with his own Hamburg Steinway but with his own personal piano tuner, the ideal supplement to his own obsessive tinkering with the mechanics of his instrument.

Then there was, of course, his never-ending fussiness that made news. Always. It started in 1948 when on his first tour of America (he made only six tours) when he was aghast that his promoters wanted him “to act as if I was from Barnum’s circus,” to live up to the high expectation that his reputation had encouraged already. He cancelled midway through the tour. This luxurious precedent set, he undertook a career of disappointing audiences. It made them want to come all the more.

It is said that he was incredulous at the huge fees he could command, though he left all commercial detail to either of his wives. His box office remained healthy even though he was never inclined to compromise his music and he cultured an aloof aspect. He refused all encores and disdained applause; after one concert he confided rather gloomily, “You see, so much applause, so much public. Then, in half an hour, you feel alone more than before.” His aristocratic mien, foppish mane and tidy, economical manner hinted at his penchant for cerebral and occasionally severe musical interpretations. If Michelangeli’s steely gaze and arid facial concentration never gave hint of emotion – his was the “face of silence,” noted one critic – he was able nonetheless to turn an audience on a whimsical phrase and march it into a cul-de-sac of breathtaking imagination. Despite his apparent detachment from the audience, his concerts were electric. With total focus and no unnecessary movement of his arms and hands, he would caress the keyboard as a shy apparition or fiery demon, and he switched from one to the other with elegant ease; this drew his audience close and spellbound, so, too, his formidable technique. These were the pianist’s dressage skills honed by hours of lonely practice.

Michelangeli was poetry in motion, but his was a poetry that didn’t always rhyme. The annoying non-synchronicity of his hands was an affectation that belonged in reality to a previous generation of pianist, and his delinquent disregard for a musical score, his eccentric phrasing or idiosyncratic tempo or stylistic tics were, if not always satisfying, supreme and Latin celebrations of individuality. Michelangeli’s playing had such conviction and composure that one could imagine that Ravel wrote the solo introductory passage of his Piano Concerto’s second movement just like that (though he hadn’t). He exercised total mastery over a keyboard which otherwise might be primed to disobey, as if a sports car misbehaving .

His discography divides opinion. There is one recording he made, however, that whets all appetite over sixty years after it was made. Definitive accounts of Ravel’s Piano Concerto and Rachmaninov’s Fourth Concerto coincided on one disc. Both of these performances exhibit dazzling technique, a masterful and sculptured control of emotion, and relish each piece’s architectural form. Before all else, Michelangeli supposes joy and life, and he offers exquisite, sheer beauty.

A video recording of one of Michelangeli’s performances of the Ravel Concerto with Sergiu Celibidache conducting the London Symphony Orchestra survives. It was recorded at the Royal Festival Hall in 1982. The Romanian conductor Celibidache saw Michelangeli as a brother, both of individuality and of musicianship; he was perhaps the most skilful of all the great conductors at accommodating Michelangeli’s foibles. Like many others of his generation, Celibidache was found rarely in a recording studio. He believed in the creativity of the moment and, not surprisingly, was best savoured live (and I am pleased that I did get to see him). His skill as mime artist was considerable, though it never outshone the magic he weaved with his baton. Near the end [8’35”] of this video, for example, his face basks in a ray of heavenly sunlight, only to turn immediately and savagely on an errant cellist.

If Celibidache was a hi-fi refusenik, I guess Michelangeli was just disdainfully different, the sort of guy who’d turn up at a teddy boy convention sporting winklepickers. He couldn’t help it. Individualism has that way about it. I am inclined to sink into the eccentricity and extravagance of Michelangeli and adore it, knowing full well that his temperament was such that he would have worn hobnail boots if a member of the corps de ballet. Yet here, with this recording of Ravel, Michelangeli gets it impossibly right and settles instead for angel’s slippers. 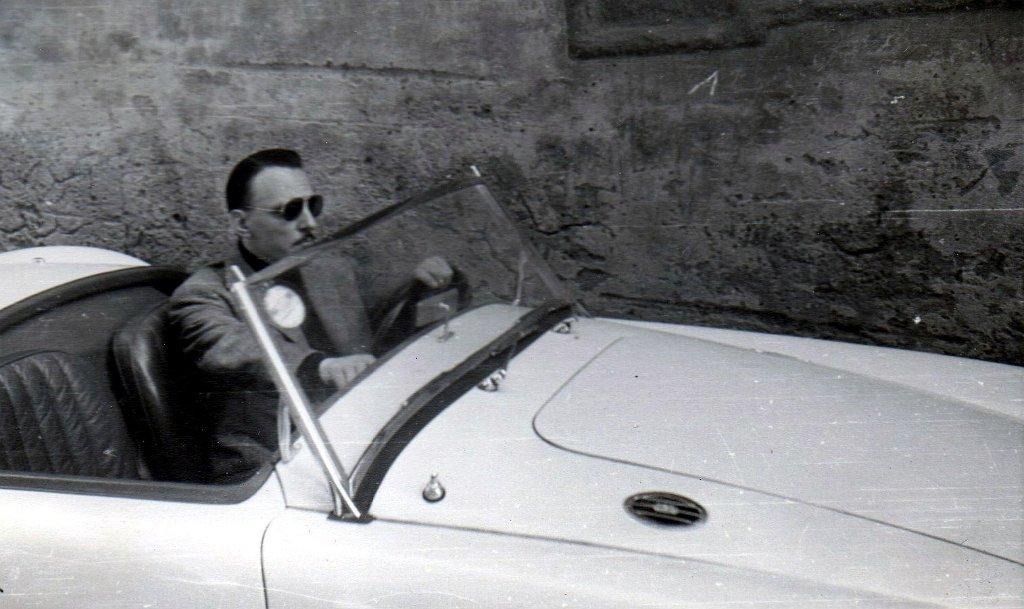 “Michelangeli makes colours; he is a conductor”