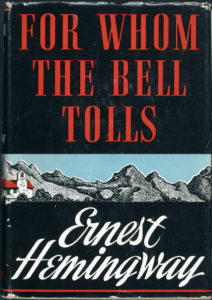 For Whom The Bell Tolls [1940]
Ernest Hemingway (1900-1961)
In the pine forests of the Spanish Sierra, guerrillas prepare to blow up a bridge. A young American volunteer is to handle the dynamiting. In the mountains he discovers the dangers and comradeship of war. He also discovers a young woman who has escaped from Franco’s rebels.

The Heart Is A Lonely Hunter [1940]
Carson McCullers (1917-1967)
Deaf-mute John Singer lives in small town Georgia and is a man of mystical understanding and is sought after by neighbours whose own problems are seemingly quieted only in the stillness of Singer’s boarding house room. This book is a disturbing and perceptive study of loneliness. 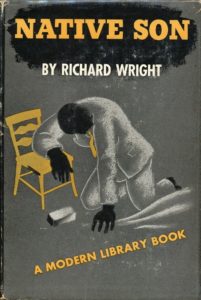 Native Son [1940]
Richard Wright (1908-1960)
Unemployed, ill-educated Bigger lives in Chicago. A wealthy white benefactor hires him as a handy-man; he accidentally kills the man’s daughter, and then kills his sweetheart in one of their constant fights; he after-wards admits to himself that he is only fully alive when killing. He is tried, convicted and executed.

Kings Row [1940]
Henry Bellamann (1882-1945)
Kings Row is at first sight a nice town, but horror and tragedy lie under the surface for many pillars of society. Parris Mitchell returns to his roots as a psychiatrist, and reveals ever-increasing horrors within the community. The potboiler of its time.

The Ox-Bow Incident [1940]
Walter Van Tilburg Clark (1909-1971)
Set in 1880s’ Nevada, emotions are high over rustlings and a perceived murder. The ‘round-up’ gang finds three men sleeping in the Ox-Bow Valley and lynch them, before discovering they are not the culprits.

The Robe [1942]
Lloyd C. Douglas (1877-1951)
Roman tribune Gallio is sent on his first assignment to Minoa, where he has to escort the crucifixion of three men. He wins Christ’s cloak, becomes ill and has to return home. He risks his life to find out more of this strange Galilean, set against the corruption of the Roman Empire. When first published in 1942 a paper shortage meant not enough copies where available to meet demand. 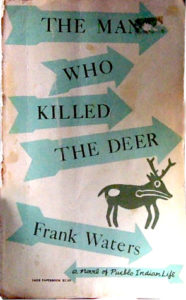 The Man Who Killed The Deer [1942]
Frank Waters (1902-1995)
Martiniano, who killed the deer, has been six years at the “away” school. He and his wife are outcasts who cannot accept the ways of the Indian or white man. The plot is secondary to the landscape descriptions and Pueblo Indian life and tradition.

The Fountainhead [1943]
Ayn Rand (1905-1982)
The story of Howard Roark, a brilliant architect who dares to stand alone against the hostility of second-hand souls. This novel presents a view of man’s creative potential, and is about ambition, power, and love. The descriptive writing is exceptional.

The Human Comedy [1943]
William Saroyan (1908-1981)
The Macauleys is an immigrant second-generation Californian family of modest means, kept widow is keeping her family together during the Second World War, and fourteen-year-old Homer, the tale’s narrator, is an after-school telegraph messenger who helps to support three other children. 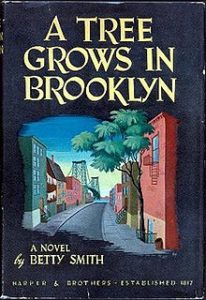 A Tree Grows In Brooklyn [1943]
Betty Smith (1896-1972)
Told through the eyes of young Francie, this is the story of the struggles of a dysfunctional family. The sights and sounds of shops, street vendors and celebrations in a bygone era are rich.

A Bell For Adano [1944]
John Hersey (1914-1993)
Italian-American Major Joppolo becomes senior civil affairs officer at Adano after its occupation by the Allied Forces, and wants to rebuild, using his democratic background and own instincts. He aims to recast the ancient bell, which has been melted down by the Fascists, but meets difficulties. Hersey, journalist and war correspondent, ex-presses in this little tale a much larger problem to come. 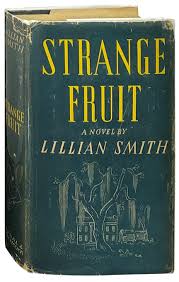 Strange Fruit [1944]
Lillian Smith (1897-1966)
In 1918, soldier Tracy Deen returns home to Georgia and resumes his love affair with Nonnie Anderson. Tracy is white, and Nonnie is a college educated black girl, now pregnant. Set in the era of lynch mob justice, where murderers must all be black and punished without delay, the too-late recognition by authorities of unrest results in a double tragedy. Attempts to suppress publication leant the book notoriety and popularity in its day.

All The King’s Men [1946]
Robert Penn Warren (1905-1989)
The lives of Jack Burden and “Cousin” Willie Stark are entwined. Loosely based on the political career of Governor Huey Long of Louisana, Jack tells the story of Stark’s rise and fall, whilst weaving his own life into the story. Stark is a hero of the common man, but gets his results by blackmail and pay-offs; Burden becomes disillusioned and is witness to his destruction.

This Side Of Innocence [1946]
Taylor Caldwell (1900-1985)
A New York playboy returns to Riversend to protect his and his sister’s inheritance from his stepbrother. In order to pass the time he falls for his brother’s future bride, who has a somewhat dubious past.

Delta Wedding [1946]
Eudora Welty (1909-2001)
Laura McRaven has just lost her mother, and is sent to the old Fairchild family plantation in Mississippi. The extended family arrives en masse to attend the wedding of her cousin Dabney (to someone beneath her station), and the strengths and weakness of family ties become obvious. The novel highlights the tedium of social life in the central south.

Mr. Blandings Builds His Dream House [1946]
Eric Hodgins (1899-1971)
Don’t even think of building your own house without consulting the Blandings. A hilarious story of moving from a city to the peaceful countryside, with its escalating costs and frustrations, is at once enjoyable and horrifying.

The Big Sky [1947]
A.B. Guthrie (1901-1991)
The most authentic novel of the West ever written, with lasting descriptions of the wilderness and the Rockies. Teenager Boone Claudill runs away and becomes a mountain man, living in isolation, hoping for adventure, freedom and hunting.

Tales Of The South Pacific [1947]
James Michener (1907-1997)
Many scenes and characters from the South Pacific are used in this book. Based on Michener’s experiences whilst travelling with Admiral Kester. 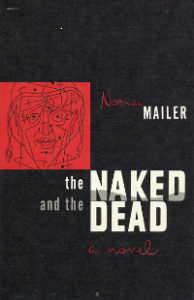 The Naked And The Dead [1948]
Norman Mailer (1923-2007)
Based on the author’s own experience of military service in the Philippines during the Second World War, this novel is a portrayal of ordinary men in battle. It is tough and gritty with language to match, and it spares no punches regarding the horrors of war and death.

The Young Lions [1948]
Irwin Shaw (1913-1984
A riveting story, beautifully told, a story of three soldiers, two American and one German, during the Second World War, and who only meet at the end after a long and bloody war.

Shane [1949]
Jack Schaefer (1907-1991)
In 1889 Shane appears at the Starrett family farm at a time when farmers and ranchers were feuding. When good and bad guys are sorted, Shane rides into the sunset. The story is told by the child of the family, who idolizes Shane and who will not fully understand what has happened until he is older.

The Man With The Golden Arm [1949]
Nelson Algren (1909-1981)
Frankie Machine, thus named for his speed at dealing cards, is surrounded by a cast of characters renowned for their love of the bottle. Frankie crashes the car in Chicago and permanently paralyses his wife, then becomes the main suspect in a murder; he goes into hiding with his friend Sparrow. There is an unexpected ending.