Books To Hang A Wonky Picture To

How To Write
Gertrude Stein 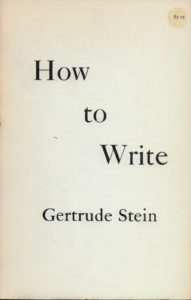 Stein’s experimental style included disconnectedness, a love of refrain and rhyme, rhythm and balance, a dislike of punctuation, a dismissal of the conventional significance of words, and repetition, repetition. Published in 1931, this explains all and is an accessible and splendid introduction to her work. She started to write when only eight, was a kaleidoscopic reader and became fascinated by grammar and sentence construction. For most of her literary life, Stein wished to alter the perspective of literature and its significance, and she used an unconventional (at times even avant-garde) literary style that promulgated new directions in experimental writing. She is described often as the literary equivalent of Cubism. She was deeply interested in that movement, collected its works voraciously, and became a great friend to Picasso.

A Novel of Thank You is midcareer assessment of her writing. In place of a traditional story, Stein explores the nature and possibilities of narrative, the conventions of novel writing, and the novelist’s relation to her materials; the novel is about “preparing a novel,” and about everything that goes through a writer’s head as she begins to write. 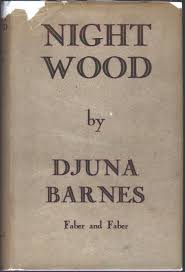 Much praised as a modernist venture, T.S. Eliot wrote the introduction to the 1937 edition (it had been published first the year before, and Eliot also amended the text to remove some of its more sexually permissive vocabulary): “… it is so good a novel that only sensibilities trained on poetry can wholly appreciate it.” It is a roman-à-clef, Barnes herself the model for one of the book’s main female characters, Nora.

The book is not derived from any nineteenth century narrative form and, as Eliot suggests in his introduction, it is a book to be read more than once, for it is a piece of art, perhaps rather a sculpture, to be viewed in different light from different angles, a three dimensional experience where the reader gleans impression and never notes factual substance, a reverie. And just as its plot is inconsequential, if it has a place in a timeline – it is set in Paris of the 1920s – in essence it is timeless. “Only the impossible lasts forever; with time it is made accessible,” wrote Barnes: this is its hidden and metaphysical nub. 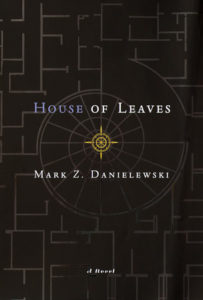 This is a book with a non-conventional structure and style. Like David Foster Wallace’s work, it contains footnotes; some pages contain only a few words, arranged in concrete style or in strange patterns to mirror the story’s flow, often inciting emotional response or claustrophobia. The book confuses readers with multiple narrators and employs coloured text, an attempt to ape chroma key compositing, a post-production technique used for layering two video stream together in film. The book itself started its life as a bundle of manuscript passed around samizdat style before it launched its author on to a typographic road trip of notoriety. 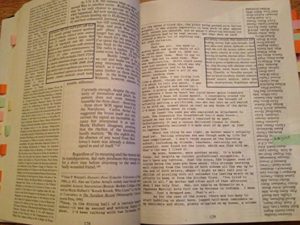 In this age of cyberspace there is a current dearth of digital experimentation, and internet forms (the pithy commentary that is the blog, for example) still pay respect to the physical page. And it is peculiar that still most advances in the novel’s form (this being very much one of them and it may yet be seen as a modern day equivalent of Moby-Dick) are in its physical format. You can teach an old dog new tricks, it seems. 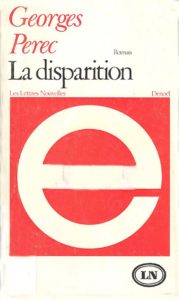 George Perec was a central figure in the Oulipo group of writers, founded in 1960 by Raymond Queneau and François Le Lionnais. The name is short for Ouvroir de Littérature Potentielle, which translates as ‘workshop of potential literature,’ and is a loose gathering of mainly French-speaking writers and mathematicians who seek to create works using constrained writing techniques, and Perec’s popular work, translated as either A Vanishing or as A Void, has become its figurehead. The story is simple: Anton Vowl is missing. Ransacking his Parisian flat, a group of his faithful friends trawl through his diary for any hint as to his location and, insidiously, a ghost, from Vowl’s past starts to cast its malignant shadow… The novel is a lipogram, that is systematically avoids a certain letter, in this case the letter ‘e’ (the most used letter in the English alphabet). It has been translated into many languages, though in Spanish the text misses out the letter ‘a’ (the most commonly used letter in that language). The New York Times book review remarked that there “is not a single ‘e’ in this novel. That’s right: no here, there, where, when; no yes, no love, no sex!”

Perec, who died young in 1982, was a highly regarded French-Jewish novelist, essayist and filmmaker; most of his writing abounds with experimental wordplay, lists and attempts at classification, and they are usually tinged with melancholy. In 1978, he won the Prix Médicis for Life: A User’s Manual. The 99 chapters move like a knight’s tour of a chessboard around the room plan of a French apartment building, describing the rooms and stairwell and telling the stories of the inhabitants.

The first recorded lipogram was by the Greek lyric poet Lasus, who was born in 548BC. The Odyssey of Tryphiodorus consisted of 26 books, with no ‘a’ in the first book, no ‘b’ in the second, and so on. It was said of the work that it could be improved by removing all other letters from each of the books.

Californian musician Ernest Vincent Wright’s Gadsby, written in 1939, also contained no letter ‘e’. To help him concentrate, Wright wrenched the letter ‘e’ from his typewriter keyboard. At the time it sold about 50 copies, but is now sought after highly.

Unhooking a DD-Cup Bra Without Fumbling is a 60,000 word lipogrammatic thriller by Adam Adams, published in 2008, without the letter ‘e’. The protagonist swaps a quaint sanctuary in Bangkok for a hard-riding gothic road trip in Asia. 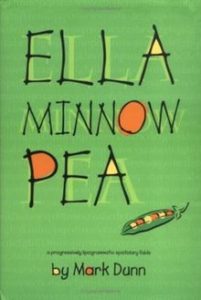 Ella Minnow Pea, written by Mark Dunn in 2001, is a “progresssively lipogrammatic epistolary fable.” The plot of the story deals with a small country that begins to outlaw the use of various letters, and as each letter is outlawed within the story it is no longer used in the text of the novel. It is not purely lipogrammatic, however, because the outlawed letters do appear in the text proper from time to time (the characters being penalized with banishment for their use) and when the plot requires a search for pangram sentences, all twenty-six letters are obviously in use. Also, late in the text, the author begins using letters serving as homonyms for the omitted letters (i.e. ‘ph’ in place of an ‘f,’ ‘g’ in place of ‘c’), which some might argue is cheating. (James Thurber did in fact write a short story about a country where the letter ‘o’ is illegal.)

Eszperente is a lipogrammatic form of Hungarian, coined by Frigyes Karinthy (the author of Metropole), in which the ‘e’ replaces all other vowels in a word.

Mike Schertzer’s poetry collection Cipher and Poverty (The Book of Nothing), published in 1998, pretends to have been written “by a prisoner whose world had been impoverished to a single utterance… who can find me here in this silence:” the poems use only these 4 vowels and 11 consonants only.

In Christopher Bok’s novel Eunoia (2001), each chapter is restricted to a single vowel. A typical sentence: “Profs from Oxford show frosh who do post-docs how to gloss works of Wordsworth.”

One of the best known univocalic poems was written by C.C. Bombaugh in 1890, centred on the vowel ‘o’ :-